Spanish cinema’s most spectacular chase scene takes place on the streets of Granada. Granada and the Alhambra are essential parts of this new animated film, Tad Jones 2: The secret of King Midas, which is breaking records at the box office.

We particularly love the chase scene, when a really special taxi zooms through the Albayzin, Carrera del Darro and Realejo, chased by three bad guys on motorbikes.

The scene is incredible. Here we can recognise plenty of the city’s authentic and unmistakable characteristics… the cobbles and steps around the Albayzin don’t make Tad’s escape easy! The bollards also do their job in stopping the bad guys from catching them.

The neighbours, watering their blooming flower pots on the balconies, the spectacular views of the Alhambra between the rooftops… and even specific corners of the Albayzin like Cuesta del Chapiz and calle San Juan de los Reyes.

Tad Jones on the streets of Granada

The souvenir used to escape from the bad guys are ceramic dishes from Fajalauza, like those that are really used as decoration across the city. On his adventure, down alleyways, across squares, cármenes and dungeons, you can even spot the benches, bins, lampposts and cables that are identical to the real ones.

The hilarious moment when the mummy gets “disconnected” from his legs, between the River Darro’s bridges, or when he takes a selfie on some steps in Realejo, inexplicably ending up on Carrera del Darro. It really is an unforgettable collection of enjoyable moments, giving you a great taste of Granada. The scene ends at the Pomegranates Gate or Puerta de las Granadas, the next step of their journey to the Alhambra.

The truth is that the producers and scriptwriters chose well when they selected Granada as the backdrop for the action. The animators have done an excellent job.

We love the result! What do you think? If you would like to go on an adventure like Tad, without being chased by bad guys, come along on one of Cicerone’s tours Granada, around the Albayzin and Sacromonte at sunset. You’ll be left mummified! 😉 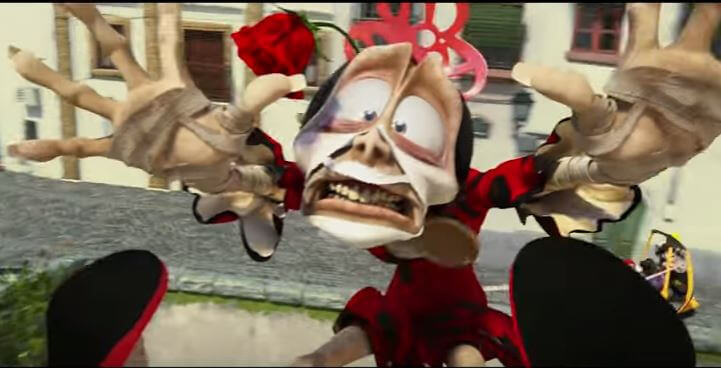