The signatures book of the Alhambra: how to leave a mark

We have often awoken to the news that some traveller or other has wanted to immortalise his presence at the Alhambra with graffiti or a daubed message. When this happens, it’s typical to think of vandals, but you might be surprised to know the number of prominent individuals and celebrities who have done it. Who would have supposed that a representative of the Jordanian government would have chosen this way to make his mark? Well, a few years ago it happened. In fact, it’s been going on for centuries. So much so that the writer of the 19th century, Washington Irvin, surprised to see the Alhambra full of graffiti, promoted the creation of a book of signatures, so that illustrious travelers could immortalize their walk. This book still exists today. We are already number 12!

When Washington Irving arrived in Granada in the 19th century, he found an abandoned Alhambra inhabited by vagabonds, delinquents and animals. What Spain was unable to see was certainly appreciated by travellers from other parts of the world. When they reached Granada (Granada Tours), they were awestruck by the beauty of the Nasrid city and decided to immortalise their presence with graffiti. But isn’t it incompatible to change a city’s heritage in this way as a means of showing your admiration for it? Doesn’t it strike you as odd that when we want to tell the world how much we admire something that we do so by disfiguring it? Odd or not, it’s clear that our need to leave our mark in some way is part of our DNA, because the same phenomenon continues to be evident in Granada and other historical sites. And this occurs not only now, but throughout history. 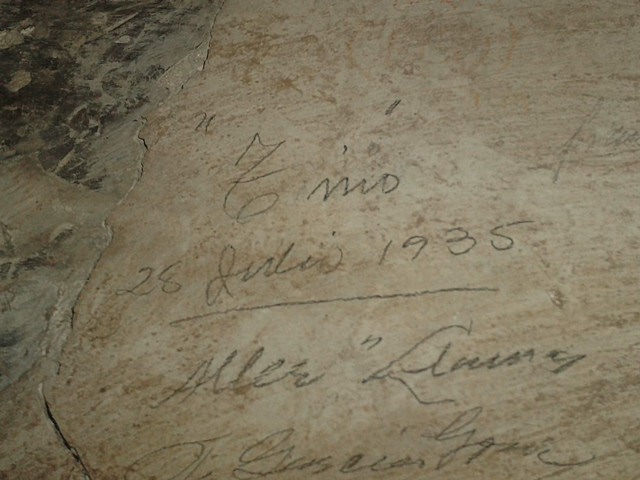 Have you ever been to the Saint Sophia Basilica? It’s full of graffiti from various centuries! There’s even graffiti from Viking emperors. Meanwhile, during the restoration work on the Roman Coliseum, a host of inscriptions from classical antiquity were discovered. At the Great Wall of China they have been obliged to set aside a dedicated area for graffiti, because it had become commonplace to find commemorative phrases and other ways of leaving one’s mark on the monument. And turning to another part of the world, it’s possible to find examples at Machu Pichu and the Taj Mahal. All these cases make it clear that we humans have a need to immortalise ourselves at the monuments we encounter. When something impresses and stirs us, we want to do something so that others know we’ve been there. It’s a need that cannot even be satisfied with selfies, given that incidents such as the one already mentioned above continue to be an everyday occurrence.
Therefore, offering a place for people to join their destiny to monuments is a great idea, either as the Chinese Wall has done or with a book of signatures, like the one we have in the Alhambra, thanks to Washington Irvin .

Leaving a mark at the signatures book of the Alhambra

Washington Irving and his friend, the Russian prince, Dimitri Dolgorouki, were horrified when they saw the walls of the Alhambra covered in signatures and declarations, whose only goal was to make it clear that their authors had been there, and that those walls had inspired them. The shock felt by these highly-cultured travellers arose because, as romantics, they believed that the past was the best time in history and that the Alhambra was one of the best representations of this glorious past. By the same token however, they perfectly understood the urge to leave one’s mark on Granada’s history

That’s why they prevailed upon their contacts to achieve two things: to promote the restoration of the Alhambra and to provide visitors with a book where anyone who wanted to could leave their story. This visitors’ book had to be preserved and safeguarded, so that the signatories could have a sense of assurance and pride at having left a small portion of their lives at the Alhambra. When they succeeded, no fewer than 43 years would elapse before the book was finished.

Today the illustrious personalities who visit us can leave their mark on the Alhambra signature book. You can write whatever you want. Some people decide to tell what they felt during the walk, another chooses a phrase they like, some people make a wish, who writes to their self of the future, to the people who will read it in a century … And everything stays saved, next to the Narid complex, without deteriorating some legendary walls and defining very well the Granada culture and the spirit of a fundamental time for Europe. Figures as diverse as Sissi Empress, at the end of the 19th century, or Rubgy’s team from New Zealand, the All Blacks, have thus entered Granada’s history.
The Alhambra is an overwhelmingly beautiful place, who would not share the desire to be part of it in some way?