Washington Irving and his beginnings in literature 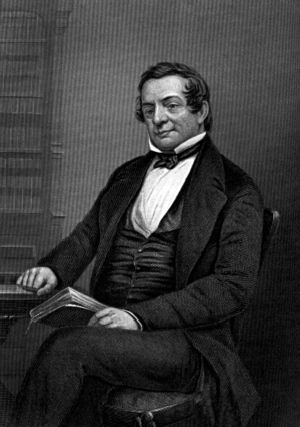 The 19th century is the century of Romanticism. A time when people started to fight to control their destiny. To achieve this freedom many sought refuge in art and literature.Washington Irving was one of them. He was born in New York, into a wealthy family originally from Britain. This was important, because for the upper class in Britain, travelling was essential. They thought it was necessary to help their children become adults. In fact, this custom came out of what was known as the “Grand Tour”, of which we first see in the 17th century.

In the case of Irving, since he was a small boy he had shown a great interest in literature and journalism. He read non-stop, although One Thousand and One Nightsand Robinson Crusoe in particular made large impact on him: these choices say a lot about his personality. However, his father wanted him to work in the family business, so he studied Law.After finishing his degree, it was then time for the Grand Tour. He travelled around Europe for two years (1804-1806), more specifically around France, Italy, Switzerland and Spain. When he arrived back in New York, he founded a company with his brothers. Yet, his call to writing was unstoppable.

In 1802 his first articles appeared in a local paper as the Morning Chronicles, edited by his own brother. In 1809 he published A History of New-York by Dietrich Knickerbocker. This book became his first hit. It became so successful that New Yorkers of Dutch ancestry in New York began to be called the name of the novel’s lead character. He continued his career as a journalist for Analectic Magazine until 1814.

In 1815, business obligations left him with no choice but to return to Europe, to Liverpool, where he met people as important as Walter Scott. When the company he founded with his brother went bankrupt, he saw the perfect opportunity to fully dedicate himself to literature. Furthermore, after the death of his mother, he decided to stay in Europe. He did not return to the United States until 1832.

He began a very productive literary period, publishing The Sketch Book of Geoffrey Crayon, The Legend of Sleepy Hollow and Rip Van Winkle. As you can see, his work was very much in the line of the romantic interest in the mysterious and dark, connecting them to History and the roots of nations. In the same way, he was also particularly fond of Andalusia and its links to oriental cultures. Romantics like Irving saw it as an exotic place within Europe, full of tales and legends to surround oneself in. At the same time, they were also sure that those mysteries contained the spiritual essence of the nations. This explains why he would look for any excuse to be able to travel to southern Spain, something that was much easier when he was named consul. That was how he came to Granada.

With the excuse of researching Christopher Columbus, he was able to stay in Seville and access the Indias Archive. As a result, he published A History of the Life and Voyages of Christopher Columbus.  From there, he travelled around different Andalusian cities, including Granada. He was able to come twice, but it was on his second visit to Granada when he stayed in the Alhambra itself, from 4 may to 29 August 1829. He didn’t do it alone, but was also accompanied by his friend, the Russian Prince Dolgorouki.

Washington Irvin lives in the Alhambra 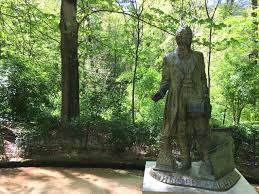 The Alhambra of 1829 was not as we know it today. It was abandoned and inhabited by vagabonds and travellers that, like him, found the Andalusian Palace fascinating. This truly surprised them. However, what really shocked them was seeing the walls of the Alhambra covered in graffiti. This was the way many travellers immortalised the date of their visit. Irving realised what an outrage this was and arranged, as a good rebel, to fight for the preservation and reconstruction of the Alhambra.

Thus, during his second stay in Granada, he didn’t just swim in the pools in the Alhambra’s courtyards and eat breakfast with his friend in the Court of the Lions. He also went for walks through the Albaicin, looking for legends and folk tales about the monument. He already had a certain degree of knowledge thanks to his Spanish studies, but folk culture, what had survived in the oral tradition fueled his imagination and pen.At the same time, it solidified his idea that the Alhambra was worthy of much more than what the authorities were doing for it.

Therefore, the Russian prince and the American diplomat decided to give the First Guest Book of the Alhambra, so that visitors and travellers could sign it instead of the palace’s impressive walls. Additionally, well-established as a journalist, Hispanist and Diplomat, he wrote articles where he explained the need to recover the Alhambra and give it the place in the history of Granada and Humanity that it deserved.

If Tales of the Alhambra caused Europe to be more drawn to the legends lying within the palace, that first guest book established a precedent: there is still the tradition of immortalizing our visits by signing it. Furthermore, his commitment to the monument was crucial for Granada properly valuing its monument. If we know what we do today about the Alhambra, if today it is one of the top three most important monuments in Europe, a large part of that is thanks to this romantic American and the support of his friend Dolgorouki.

While Tales of the Alhambra helped Europe to feel even more attracted to the legends the Palace treasures, that first Guestsbook set a reference: today, we keep the habit of immortalizing our vistits on the book. In addition, his commitment with the monument was vital for the recognition of its value. If today we know what we know about the Alhambra, if it is among the most important monuments in Europe, it is due to this Romantic Northamerican embassador y and his friend Dolgorouki support.