The tradition of May Crosses in Granada

Today is the 3rd of May and same as every year, Granada has got dressed up in frills and flowers to celebrate May Crosses. Dances, flamenco, broad beans with salaíllas (a type baked flat bread sprinkled with coarse salt) and enjoying crosses that are full of nature, life and decorated with carnations or roses, shawls and copper adornments. In courtyards and squares, the air is alive with cheerfulness and tradition, but where does the May Crosses tradition come from? 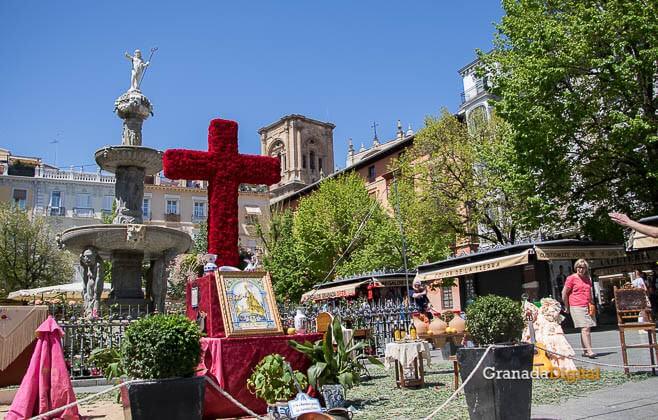 All cultures, from ancient times, have celebrated the arrival of Spring with rituals of devotion to the gods of nature. For agricultural societies being in the favour of these divine beings is of transcendental importance since a large part of their subsistence requirements depended on the harvest. Coinciding with these dates, in the Christian tradition on 3 May the May Crosses Festival is celebrated.  In Spain it appeared on all of the calendars and Mozarabic Rites, being associated with the legend of discovery by Saint Helena of the true Cross of Christ:

In the sixth year of his reign, Emperor Constantine clashed with the barbarians on the shores of the Danube. Victory was considered impossible due to the size of the enemy army. One night Constantine had a vision: Christ’s cross appeared in the sky shining and above it were the words, In hoc signo vincis (“With this sign you will emerge victorious”). The emperor had a cross built and put it in front of his army and then easily defeated the enemy hoard. Back in the city, understanding the meaning of the cross, Constantine was baptised in the Christian religion and ordered churches to be built. Immediately after, he sent his mother, Saint Helena, to Jerusalem to search for the true Cross of Christ. Once in the sacred city, Helena summoned the wisest priests and got a confession on the place where the Cross of Jude was located (later Saint Jude Thaddaeus, bishop of Jerusalem). On the mountain where tradition places the death of Christ, three hidden crosses were found. To discover which one of them was the true one, they were placed one by one on a dead youth, who was resuscitated after being placed on the third one, that of Christ. Saint Helena died pleading for all of those who believed in Christ to celebrate the commemoration of the day they found the cross, the 3rd of May.

In Granada, the tradition became deeply rooted, and lived on with great intensity from the moment the city was conquered by the Catholic Monarchs onwards. Following the intimate tradition of Arabic carmen houses, the Crosses of May were originally celebrated in the inner courtyards of the homes. Altars were built there where the crosses raised were adorned with wreaths of flowers, with objects displayed beside them which conferred distinction and prestige. The initial intention was to honour the cross with the greatest riches, although it became a demonstration of wealth, carefully put on display by its owners.

The traditions of the Fiesta de las Cruces

Ceramic pieces, copper, manila shawls and everything which would suggest abundance was selected for exhibition on these occasions. Plants, fruit, grains and everything related with the typical vegetation of this time of year also had its place. Friends and family members gathered around the cross, organising recitals of dancing and verse, where all of them were for the purpose of praising the Cross and Spring.
In the neighbourhoods, the less powerful classes organised collective crosses in squares and shared apartment courtyards, where the neighbours lent their best possessions for adorning the altars. There was intense competition and rivalries between them, on many occasions boiling over into such a degree of violence that the authorities had to intervene.

Something that is essential for any cross is an apple (referred to as a ‘pero’) pierced by a pair of scissors, known in Spanish as the ‘pero matao’.  When talking about the crosses in Spanish there is a word play which is traditionally used due to the word ‘pero’ in Spanish also meaning ‘but’. The rough translation is “there are no buts, as they have been cut out by the scissors.” This reminds the viewer that they shouldn’t criticise the decoration of the crosses. There also has to be a copper brazier, a clay plate, or any kind of container where those visiting the cross can leave some coins (chavicos) if the cross seemed elaborate enough for them. They are alms that the neighbours who set up the cross will later distribute to those who are most in need. 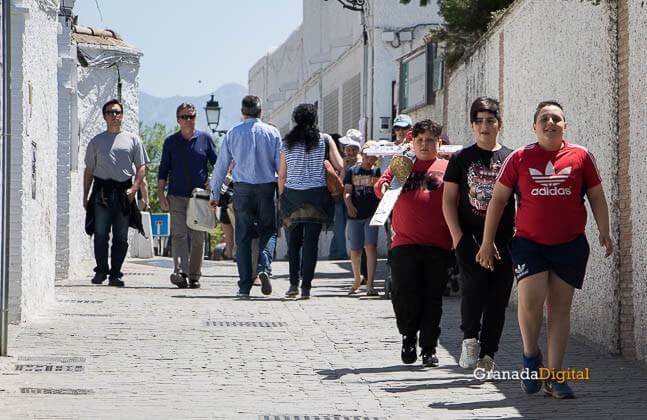 One of the traditions seen less and less in the streets of Granada is the children’s version of the crosses. Little children made their own portable crosses walking around asking for “a chavico for the Holy Cross” collecting coins.

On the municipal government’s website you can find out where the crosses will be in 2016, as well as the programme and other traditions.