Every week, we go in search of more of Granada’s hidden corners to share with you – the Granada that offers something more than just its magnificent Alhambra and impressive sunsets. Today, we go back to the period of Muslim domination and visit the oldest remaining residential Nasrid building. Granada’s Nasrid monarchs called the Cuarto Real de Santo Domingo the Huerta Grande de la Almanxarra. It was an old 13th century mansion, surrounded by gardens which followed a similar style to that of the Generalife, and was located along the wall that surrounded the suburban area of los Alfareros. Aixa, the last Nasrid queen, sold it to the Catholic Monarchs after the conquest. Isabella and Ferdinand in turn handed it over alongside the Huertas de la Almayara, to Fray Tomás de Torquemada of the Santo Domingo Order, in order for the Convento de Santa Cruz la Real to be founded.

The old Huerta Grande de la Almanxarra consisted of an orchard with a garden, and diverse structures among which a qubba or protocol room, located within one of the towers along the wall, stood out. The qubba was preceded by a doorway, with a fountain and an octagonal pond lying in one of the front areas of the garden. Based on the graphic and literary evidence that remains, this was maintained until the middle of the 19th century. Afterwards, the qubba was surrounded by new construction work for a residence, leading to the disappearance of the doorway, fountain and pond. The old garden was buried and its level raised, making way for a new one. The primitive qubba was the subject of several non-scientific renovations, and became a living room in the house. 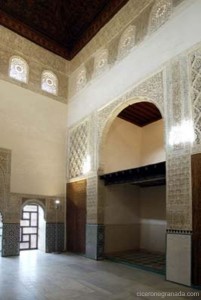 What is left of the Arab construction is a tower, which can today be found inside a modern building surrounded by gardens. Its interior consists of a 7-metre-long square room and an entry arch with a glazed tile base and the inscription: “There is no God but Allah”, in Kufic lettering, intertwined with complex verses from the Koran, around the outside. On each side of the room there are alcoves with adornments and inscriptions on their arches, plaster panels on the walls, and twenty small arches with gypsum plaster latticework that a wooden framework in the form of a knot rests on, which has an impressive structure beneath its decorative appearance.

On the sides of the room there are three balconies, the middle one with a hanging arch, and a simple, interlaced skirting which surrounds the chamber. The exceptionally varied plasterwork is carved and painted in cool tones, which twinned with the lack of Nasrid motifs, places this building as dating back to the first half of the 13th century. 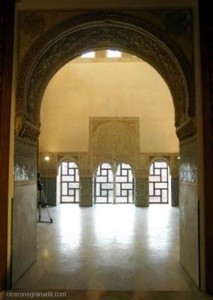 The old property suffered successive losses, which intensified following the 19th century Disentailment of ecclesiastical assets. At that time the area of the complex which was not occupied by the convent was taken into private hands. During the 20th century, the house that was attached to the qubba underwent aesthetic changes. Those that were made to the western side were particularly evident, as the open terrace was substituted for a covered viewpoint, and as of 1966, for a concrete pergola.

In 1990, it came to form part of Granada’s heritage, after being acquired by the Ayuntamiento de Granada, which from then on began restoration on it. Work is still being undertaken today in order for it to be opened to the public.