Between big blocks of flats and asphalt knots near Camino de Ronda, the arterial road for the traffic around the capital, there is a small Arab palace surrounded by cool, refreshing gardens, which has withstood the history and turmoil of the 21st century that has devoured the majority of constructions and buildings in the area. The Alcazar del Genil, a palace of Almohad origin, functioned as a recreational house for the Nasrid Court in the 13th century. It hosted big receptions as well as providing accommodation for other royal houses during their stay in Granada. The Alcázar is located in the forecourt where King Boabdil handed over the city keys to the Catholic Kings on the 2nd of January 1492.

The small qubba is the only part of the original building that remains, and reminds us of the Persian Kiosk-Palaces , which stood in the middle of the beautiful gardens, surrounded by ponds and fountains responding to a landscape architecture symbolising the Sufi paradise.

The qubba is a tower with a wooden vault and a lace interior, a pretty, decorated square room which can be accessed through a pointed horse-shoe arch, that some lattice windows let light in through. At the centre, a fountain with a flower bed, which originally would have had an enormous pond or pool about 150m away, which was discovered only 5 years ago during the construction work for the tram, and where, according to tradition, marine competitions were held between the Muslim princes, simulating the destruction and the burning of the Christian galleons.

On both sides of this pretty, central room are two alcoves which are accessed through twin arches, covered by a flat, wooden ceiling. All of the buildings are decorated with ataurique (ornamental plasterwork) and covered in epigraphical inscriptions that restate praise for Allah and the king who constructed it, as well as fragments of the Koran. There are also polychrome geometric drawings. Originally, the floor was made of stone and glazed ceramic. 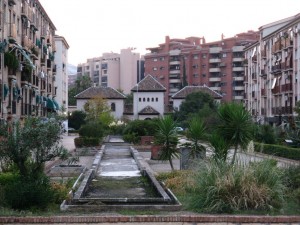 The current setting of the Alcazar del Genil is very different from what it was like when it was first built. It used to be located in the middle of the plains, outside Granada’s city walls, like many other recreational estates belonging to the Muslim Monarchs outside the Alhambra, the palatine residence: they are located in places of great scenic beauty. Today, this landscape has changed. Buildings like the Palacio de Congresos and residential areas – Alcazar Genil and Jardin de la Reina, have been built in the area, contributing to the fact that the Alcazar del Genil goes unnoticed by many.

Past and present of the Alcazar del Genil

During the Muslim domination (711-1492), Granada, known as the Western Damasco, saw some splendid moments, predominantly during the Zirid and Nasrid dynasties. This Muslim palace is situated on what is currently Paseo del Violón, on the

banks of the Genil river, next to another important building from the same period, the Ermita de San Sebastian. This is a religious building and is particularly interesting as it is the only building of this time that survived here in Andalucía. 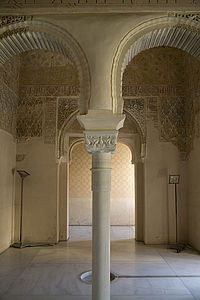 The governor of the al Sayyid district ordered for it to be built during the time of caliph al-Muntasir during the Almohad period, circa 1218-, and it was then remodelled later on during the Nasrid period. Inhabited by the monarchs of this same dynasty, one of its last residents was Aixa, the mother of Boabdil, the last Nasrid king. As was the case with other royal buildings, after the Conquest of Granada by the Catholic Kings, it was sold to the Christian Monarchs. Subsequently, it was passed into private hands, and one of its last owners were the Duques de Gor, who sold it to the State in the 50s. They say that ambassadors to the Christian Kings and the North African sultans lived there, like the young D.Felipe, invited by Al-hamar, founder of the Nasrid Kingdom of Granada (1238). The Generalife, Dar-Al-Arusa and the Alcázar Genil are the only royal, rural residencies or gardens that remain today.

Today, the Alcazar is open for public visitation, and is also the headquarters of Francisco Ayala Foundation. During the visit it is possible to explore the qubba, the adjacent buildings where the Foundation’s agencies are located, as well as the gardens. The Alcazar del Genil can be visited during the same opening hours as the Foundation itself: Monday to Friday from 9am-3pm, without needing to book in advance. For schools or associations, the foundation has a special visit associated with the figure of Ayala, Granada’s greatest intellectual of the 20th century.