An abbey on the most sacred hill in Granada

In one of the many caves dug into the hill, relics from some saints from the 16th century who had been martyred were found in one of these same caves, along with writings in Arabic on lead sheets, called the Lead Books. On them, in addition to the legend of Saint Caecilius of Elvira, Saint Ctesiphon and San Hesychius, an assumed fifth testament was found, written by Mary the mother of Jesus, which combined the peninsula’s two great monotheist religions, Islam and Christianity, through the points they both have in common. After years of being studied, the Vatican determined that only the part referring to the Saints was true, while the part with Mary’s testament was just an attempt by Moorish nobles in Granada to avoid their expulsion as well as that of their people.

In the same place where the books and remains of the male saints were found, an abbey was built, the Abadía del Sacromonte, which hosts thousands of Granada residents on the first weekend of February each year, who make a pilgrimage there to celebrate the day of the city’s patron saint, Saint Caecilius. Granada locals also flow into the Sacromonte complex during Holy Week, when on Holy Wednesday they come to see the Christ of the Gypsies, lord of Sacromonte, enclose himself in his abbey, after having climbed up its steep hills, lit by firelight and accompanied by the singing and dancing of the neighbourhood’s local residents. 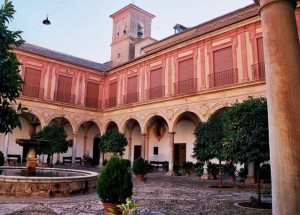 In addition to its legends and traditions, the Sacromonte complex is of extraordinary artistic, cultural and religious value. It is comprised of the Holy Caves, the abbey from the 17th-18th century, the school from the 17th century and the seminary. In 1610 one of the first private university colleges in Europe was founded here. Crossing the patio with its 28 Roman arches you get to a chapel with an alter at the entrance to the caves. In the main one where it is assumed the oven was located that the saints were martyred in, there is a wooden cross that belonged to San Juan de Dios. The abbey preserves extremely valuable possessions, although they can’t all be seen, a large amount of them are located in the Museo de la Abadía, such as the Plataforma de Vico, the oldest city map in existence of Granada, a copy of Generalidades sobre la Medicina de Averroes and a letter from Pizarro to the Holy Roman Emperor Charles V.

The Abadía de Sacromonte. The abbey is a privileged place for meditation and contemplation, where you can silently admire the impressive views of the Alhambra (Alhambra Tours), the Albayzin, the River Darro and imposing the Sierra Nevada mountains. 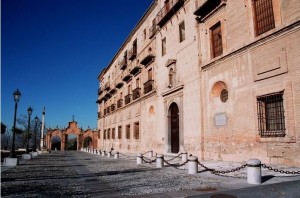 There are two ways to access it; one is going up on foot from Peso de la Harina, half way of Cuesta del Chapiz, via the Camino del Sacromonte. Next to the Ermita del Santo Sepulcro there is a stone cross which shows the way to the Abadia del Sacromonte. The second way is from above, from Haza Gande, and goes down by the Camino de San Antonio until you get to the complex. Entry is €3.50 and is done with  guided tours in Spanish, which begin every 45 minutes, from Tuesday to Sunday, between 11am and 1pm and 4pm and 6pm. On Sundays there are only two tours since mass is at 12pm.

More information on Abadía del Sacromonte, can be found on the websites Archidiócesis de Granada, the Museo de la Abadía, GranadaDirect and on Amigos del Sacromonte.