Best destinations to visit in Andalusia

Andalusia is one of the most charming regions, capable of enchanting all types of travelers. Cities that still show traces of their Phoenician, Roman or Arab origins, offering a fascinating architectural and cultural mix.

An ideal destination for all tastes, since it harbors an infinite number of possibilities. In its 87,268 square kilometers you can visit its two national parks, coves with a wild beauty, white villages, majestic monuments, exquisite cuisine and a culture full of art.

Discover the best destinations to discover Andalusia and immerse yourself in its art, culture and tradition. 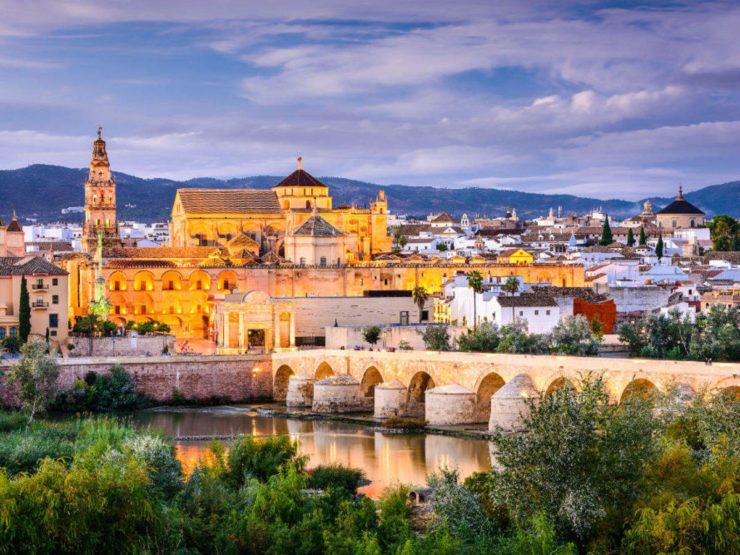 Crossing the old Roman Bridge over the Guadalquivir is enough to feel that you are in a city with more than 2000 years of history. As soon as you cross it, the imposing Mosque-Cathedral awaits you, a unique monument in the world thanks to the fact that Gothic, Baroque, Renaissance and Mudejar styles coexist in harmony.

Getting lost in the Jewish Quarter is synonymous with a journey through the history of this culture in the city. Narrow and twisted streets that hide charming corners, such as the well-known Calleja de las Flores.

The Alcazar de los Reyes Cristianos is one of the most essential monuments of Cordoba, a fortress with beautiful gardens where it seems that time has not passed. Not to mention Medina-Azahara, one of the most impressive archaeological sites in the country.

The city is famous for its Fiesta de los Patios, declared Intangible Heritage of Humanity in May, although it is possible to visit some of the most beautiful and popular patios throughout the year. A place worth seeing. 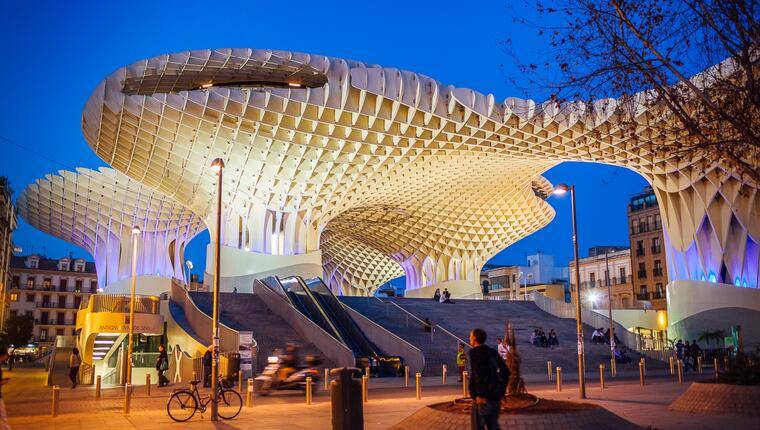 On the banks of the Guadalquivir and guarded by the Torre del Oro, is Seville, a city full of art, tradition, culture and much salero. And as the song says, it has a special color, to prove it you only need to visit the Plaza de España or the Triana bridge at sunset.

The city has numerous monuments that enchant all types of travelers. From the Cathedral of Seville, the third largest temple in the world and where the tomb of Christopher Columbus is located, the beautiful Real Alcazar with a fascinating palace complex and even the Archivo de Indias, a Renaissance-style building that houses documents with great historical value.

A visit to the famous Triana neighborhood is a must. A network of narrow streets full of bars, a neighborhood with duende, known for its fervor to Easter with numerous churches that house the most popular brotherhoods and the peculiar Alley of the Inquisition. 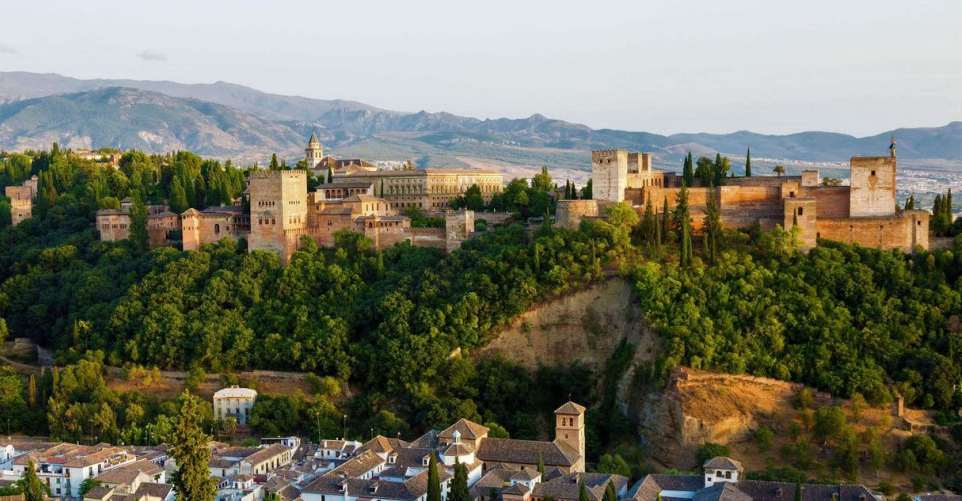 Granada is every year in one of the first positions of the most visited cities in Spain, and it is not surprising, its culture, duende and rich heritage are reasons enough to want to discover it.

There are plenty of things to do in Granada, ideal plans for a weekend as well as for a single day. This Andalusian city has the perfect tour for every traveler. The historic center is witness to authentic jewels with numerous monuments to visit.

The history and the passage of different cultures in the city makes the best way to visit it is with one of our Tours in Granada to fully immerse yourself in the essence of each stage. Putting in context the vestiges of each culture and discovering the curiosities of each neighborhood will help you understand the magic of Granada.

The Jewish quarter of the Realejo, the old Muslim quarter, known as Albaicin and considered a symbol of the city, Sacromonte to learn about the gypsy tradition and the art of flamenco and the monuments of the Christian period of the old town.

And the essential visit to the jewel in the crown: the Alhambra and the Generalife. Considered one of the most beautiful monuments, since it is the best preserved Arab palace in Europe. Palaces to fall in love with, gardens that are a haven of peace and an Andalusian style fortress that has been an inspiration over time for artists of all kinds.

Join one of our Alhambra Tours organized with small groups to enjoy an exclusive experience. Let yourself be seduced by its charms and discover its secrets with one of our passionate guides.

Nestled among the olive groves, Úbeda and Baeza are considered the most beautiful towns in the province of Jaén. Both have been declared World Heritage Sites thanks to their architectural richness, very different from the rest of most Andalusian cities.

They do not come from the Arab period, since Queen Isabella the Catholic ordered the destruction of the Muslim fortifications. Therefore, they are Renaissance-style cities, as can be seen in their palaces and monuments.

And not only this. They are located in an exceptional setting, surrounded by the Sierra de Cazorla, a national park, the Guadalquivir Valley and the Sierra Mágina. A paradise for nature lovers. 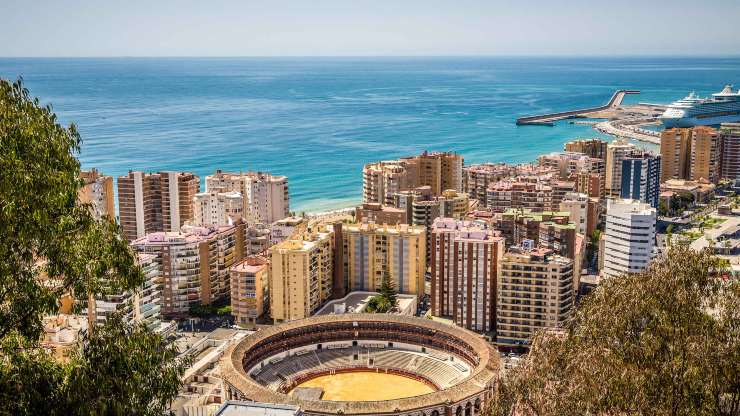 When mentioning Malaga come to mind its beaches, the Costa del Sol and its fair, but the city has much more than all these tourist attractions. A historic center that surprises as soon as you visit it thanks to its majestic monuments and archaeological remains.

The Alcazaba is the most characteristic, a fortress built in the 11th century by the Arabs to protect the city from the Catholics. At the back of the castle you can visit the Roman Theater, from the 1st century A.D. Therefore, it is the main attraction of the city, a complete visit thanks to its charming archaeological museum, its beautiful gardens and the spectacular views it offers of the harbor. But the best panoramic views of Malaga are obtained from the Gibralfaro Castle.

Malaga boasts a wide cultural offer thanks to its numerous museums, including the Picasso Museum, the Carme Thyssen Museum, the Pompidou Center or the Picasso’s Birthplace Museum, among many others.

One of its most unknown jewels is the Historical Botanical Garden of La Concepción or the Soho Neighborhood, an old neighborhood in decay that has been transformed thanks to the murals of street artists.

The most daring travelers can enjoy the Caminito del Rey, one of the most famous hiking trails in Spain. Adrenaline in its purest form. In the surroundings of the capital, it is also possible to visit the Caves of Nerja or the Natural Park of the Mountains of Malaga.

Nestled less than 2 hours drive from Malaga is the charming town of Ronda, known as “the dreamed city”. Legends of bandits, spectacular caves, historic wineries or magical sunsets from the Tajo. A hidden treasure in the mountains with a great architectural and cultural value.

Ronda would not be the same without the New Bridge, a construction of the eighteenth century that has become the symbol of the city. Crossing it is a marvel, but it is even more marvelous to descend to its feet to contemplate its 100 meters high stamp in the gorge of the Tajo. A picture postcard image.

The historic center, the heart of the city, has been declared a Historic-Artistic Site, thanks to its spectacular monuments. Surprise yourself with its peculiar Casa del Moro, visit its ancient Arab baths and discover the ruins of Acinipo.

Go to the Balcón de la Aldehuela to enjoy the best sunset, known by the frequent expression mentioned by everyone who looks at it due to its high altitude. When you get there you will know which one it is, because you will not stop hearing it, even if it escapes you. 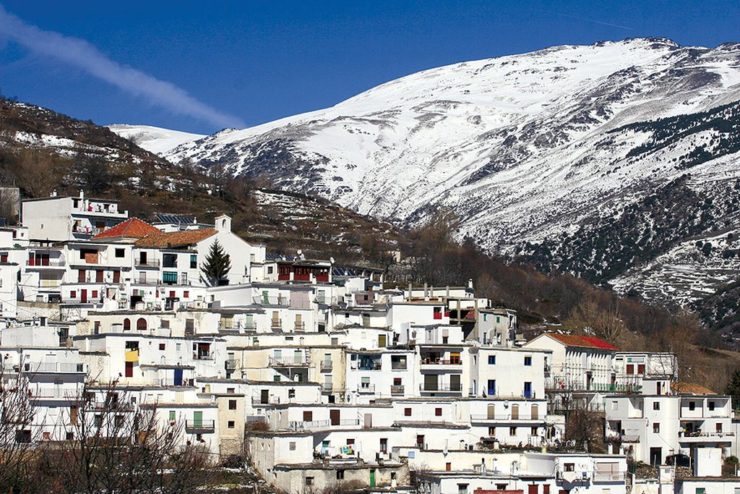 The southern slope of Sierra Nevada is known for Las Alpujarras, white villages with Moorish roots that have put the area on the map for this route through the most beautiful villages of Andalusia.

Lanjaron is the gateway to the Alpujarras of Granada, known for its architectural charm, its waters from the melting snow of the Sierra Nevada and especially for the thermal baths of Lanjaron, popular since Mozarabic times for its medicinal benefits.

The Poqueira ravine is the most photogenic area of the route, steep streets, white facades and decorated with flowers that provide a special charm. It also highlights the village of Pampaneira, a place where the Andalusian essence remains intact.

Essential stop in Buibón, known for maintaining the typical architecture of the Alpujarra villages and Trevélez, the highest village in Spain.

The peculiar Soportújar, is increasing its popularity due to being known as the “village of witches” for its legends. Its streets are decorated with all kinds of details and statues that make reference to them, it even has a Buddhist Center!

Now you know the best destinations to visit in Andalusia, enjoy the purest essence of the area. Places full of culture, art and magic that will captivate you from the first second.