The Alhambra opens to the public the Habitaciones del Emperador

The Alhambra (Alhambra Tours) is opening the Habitaciones del Emperador, also known as the Habitaciones of Washington Irving, as the space of the month for January with them being closed to the public the rest of the year due to their delicate nature.

Visitors accessing the Granada monumental complex will have the opportunity to discover these rooms on Tuesdays, Wednesdays, Thursdays and Sundays which also remind us of the North American author who wrote the famous Tales of the Alhambra as a result of staying there in 1829 in the rooms adjacent to them, known as the Salas de las Frutas. 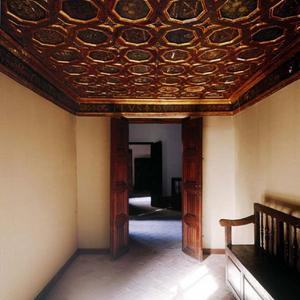 Habitación del Emperador/Irving, in the Alhambra in Granada As a part of adapting the Islamic palace for new Christian uses it is understood that the rooms were built in what was known in the Christian era as the prado, near the Sala de Dos Hermanas.

In this area a series of rooms were planned to connect the Palace of the Lions with the Palacio de Comares. They tend to be dated back to the time of Charles V although some researchers have pointed to possible interventions during the time of the Catholic Monarchs.

Despite these visual changes, the new construction work was done in an integrated fashion with the rest of the Nasrid rooms, since they were adapted without needing to achieve symmetry in their layout.

The new rooms were organised around an interior hallway and around an irregular courtyard, giving up the Islamic layout based on independent cells surrounding a courtyard and as such changing the access between the rooms.

The first room, known as the Office of the Emperor, conserves a fireplace and a coffered ceiling, done in 1532 by Pedro Machuca, and then an ante-chamber used to access the royal bedrooms.

On the door there’s a marble plaque put there in 1914 in remembrance of the famous North American author Washington Irving, who stayed in the rooms known as Salas de las Frutas. Between 1535 and 1537, Julio Aquiles and Alejandro Mayner, close to Rafael, were entrusted with painting the walls in these rooms.