The unknown female sultan of the Alhambra

Behind the walls of Granada’s mysterious Alhambra a number of intriguing episodes occurred, and are being gradually unveiled thanks to new research. Some of these studies conclude that many of the women belonging to the Nasrid dynasty (from the 13th until the 15th century), remain neglected and forgotten, due to the masculine nature of medieval Arab historiography, among other causes. Today. the conspiracies, rivalries, influences and hidden love stories in the court form an essential part of research which aims to unveil the life and personality of a group of powerful women in this period, telling this story through their eyes for the first time. 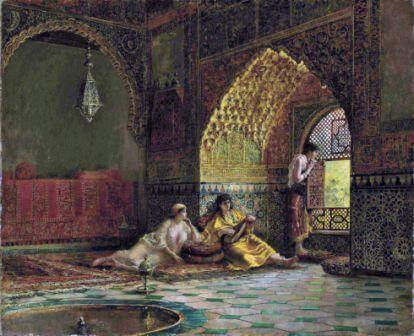 A painting showing Nasrid women in the Alhambra. Sultanas “In almost 260 years of Nasrid Monarchy, there were both men and women, and each one had their own lineage and importance. Some of them played very important roles”, explains María de Mar Villafranca, Director of the Patronato de la Alhambra and coeditor of the study of Las Sultanas de la Alhambra (Editorial Comares). The great unknown women of Granada’s Nasrid kingdom (13th to 15th centuries), by the Arabist Bárbara Boloix. It is a scientific analysis that delves deeper into these women’s lives and relationships, without forgetting concubines and daughters. Of the dozens that exist and of those detailed on the family tree, the author highlights three with very different personalities. Firstly, although the sultana Fátima was born in the 13th century, she was of primary importance in 14th century Nasrid politics. Later, Rim, Yusuf I’s illegitimate wife was also important, and lastly, Umm al-Fath, Mohamed IX El Zurdo’s first wife, stood out in the 15th century, known for her finesse.

Fátima, sister, daughter and granddaughter of monarchs, undoubtedly achieved the status and power that no other princess had ever achieved before. As he had Nasrid blood, her son Ismail I ascended to the throne, encroaching on the power of the legitimate Nasrid branch and later on, assuming regency of two grandchildren. In addition, the tribute that the vizier, chronicler and secretary of the Nasrid court, Ibn al Jatib, paid during the funerals held in the Alhambra, is evidence of the unusual mark left by Fátima. “For a woman, this was something completely exceptional, given that it was a honour usually reserved for the Emir”, highlights Boloix. Fátima’s dignity contrasts with Rim’s pushy personality, one of Yusuf I’s [Son of Ismail I] concubines, who plotted a conspiracy in order to put an end to reign of his stepson, Mohamed V, so that Ismail II, his firstborn, would ascend to the throne. She stole the royal treasure and manipulated relationships with friends and family in order to plot the dethronement. According to Medieval Arab and Christian sources, she didn’t hesitate to arrange the marriage of one of his daughters to Mohamed VI, also a manipulator, from a parallel branch of the Nasrid dynasty. Both took part in the unexpected taking of the Alhambra, overthrowing Mohamed V in August 1359. Rim’s story is not as well known, but both challenged male authority and reflect the strength of women, given that the Sultan should be the son of a Sultan, but not necessarily of the first or lawful wife (Islam permitted up to four, compared to an infinite number of concubines).

Sultanas, schemers in the shadows

More examples of these conspiracies can be found at the heart of the Nasrid dynasty, such as the struggles between Aixa and Soraya, Muley Hacén’s wives, to ensure the supremacy of their respective sons to the throne. Although the fight for power and arranged marriages were common, there are some cases of delicate relationships. The first wife of Emir Mohamed IX El Zurdo, Umm al-Fath is key to the 15th century. Chronicler Ibn Asim dedicates a surprising tale to her, stating that she was “pure, honest, a do-gooder, charitable and giving”. “Between the two of them there was more fondness and compassion than God tended to create between two cousins (…) they influenced each other, their sincere harmony, the perfect fit”. In addition to other contributions, the study reveals matrimonial covenants from the Nasrid bloodline with dynasties in North Africa, and confirms the presence of black slaves in the Alhambra.