The Alhambra in the literature: a literary myth from Moorish until nowadays

From the texts of the Moors to present day Arabic authors such as Lebanese writer Amin Maalouf and the Iraqi poets Al-Bayati and Syrian Nizar Qabbani, Muslim artists (and Christian ones as well) were inspired by the inexhaustible beauty of the symbols enclosed within the palaces and gardens of Granada’s Alhambra.

That is how it is reflected in a scientific study of more than 2,000 literary and historical references from the 15th century to the present day that, financed by the National R+D+I Plan, that has been undertaken by Arabists at the University of Alicante, headed by professor Luis Fernando Bernabé. This expert stated that, in addition to Maalouf in “Leo Africanus” and Al-Bayati and Qabbani, the Alhambra is referred to in numerous works by Muslim authors, with it being identified as the high point for Al-Andalus, the golden age when it dominated the arts and sciences.

Examples of this role in the collective Muslim imagination found in poems, novels, romances, theatrical plays and historical chronicles are Egyptian Radwa Ashur, who even had a trilogy on Granada, and her compatriot Husayn Munis, with the work “Trip through Spain”, among others. The Romance of Abenámar, where it is said that (the Alhambra) is “marvellously” worked (15th century), the historical documents of Luis del Mármol Carvajal, the stories of the first Italian travellers such as Andrea Navagero and the production by Alonso del Castillo, translator for Phillip II of Spain, reflect the fascination that the palace also inspired (as well as the Moors of Granada) from the Christian side.

Afterwards, some western literary figures were added, such as Washington Irving, who even had a room in the palace and wrote his well known “Tales of the Alhambra” in it, Victor Hugo in order to praise the romantic facet of the Alhambra, and Heinrich Heine, with his poem “Almanzor” in the 19th century and the drawing power hasn’t diminished to this day with a host of references from writers as popular as Salman Rushdie (“The Moor’s Last Sigh”) and Paulo Coelho (“The Alchemist”).

The Alhambra in the literature 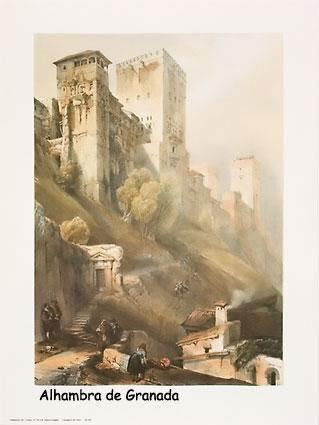 From the beginning, for literary Christians the Alhambra evoked “absolute power” in the victory over the infidels while for the Moors, such as Mancebo de Arévalo de Aragón with his aljamiado treatises (Spanish with Arabic characters), it was the painful defeat that put an end to their zenith. “However it soon turned into a universal symbol for Arabs and non-Arabs alike to embody the two cultures coexistence, both for having been built by the former and preserved by the latter in Christian Europe, which gave rise to some rich conceptual and symbolic dialogues”, Bernabé has emphasised.

In this way, Al-Andalus and its ultimate expression, the Red Fortress, are appreciated by Arabic artists as intimate elements of a “splendid” past, which leads them to “anticipation” with the hope of a better future. “It’s a moving symbol for Arabs and not a call for a new conquest, as maintained by some fundamentalist spokespeople (such as Bin Laden in some messages), who try to manipulate universal feelings”, underlined the University of Alicante professor.  Considered one of the most recognized architectural complexes on the planet, among the comparisons attributed to it in from the Muslim world, some of them are related to the loss of Palestine.  Focusing on the literary aspect, it is compared with feelings as pure as pain, melancholy, nostalgia and, at the same time, with beauty, hedonism and true love. The musicality of the water in the fountains, the majesty of the Salón de los Embajadores with its ceiling of constellations, the Patio de los Leones, the Mirador del Lindaraja and the inverted image of the palaces when reflected in water are some of the most cited areas and elements. The research was started by María Jesús Rubiera, although she died shortly after and was replaced by Bernabé leading a group of Arabists made up of Mikel de Epalza (also deceased), Eva Lapiedra, Francisco Franco Sánchez, José Cutillas and Jorge Pascual.