Agrila, the fairy of the Albayzin

Today we want to give you the gift of a precious and popular legend from the Albayzin in Granada. If you’re left wanting more, don’t forget to take a wander around Albaicin at twilight with our walking guided tour. 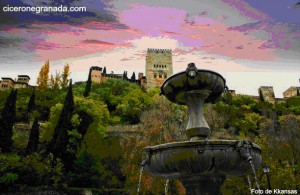 The legend says that in Nasrid times, on summer nights, with the cooler air, youngster ladies from Granada’s Albayzin tended to walk down to a fountain on the banks of the Darro, to collect water.  The fountain was in a beautiful grotto, where lots of women met to speak about their hopes and dreams.  The place seemed so magical that they made a pact to keep it a secret.

One night, Aixa, one young women, drank from the fountain and told her neighbours:

“Luckily, the fountain is sweet today, too! It’s like honey! Yesterday I took the jug home and after dinner, my husband was so affectionate towards me! said Aixa, dancing around the fountain whilst she filled her pitcher.

“It’s curious!”, said another pretty girl in the group. “When the water is sweet, the men are happy and loving. But if the water flows bitter …it’s best to stay away from them! They get agitated and very angry”.

All of the youngsters kept quiet, thinking that actually, what their neighbour had said was true. They looked at one another, thinking about all the times what their two friends were saying had been true. After a few minutes, Aixa broke the silence:

“Why does the taste of the water change all of a sudden? Some days it’s sweet, and others, very bitter.  I don’t get it, but it’s very curious”, said Aixa, pulling her jug of sweet water from the fountain.

They were so absorbed in their own conversation that around the spring that they didn’t notice an owl perched on one of the rocks by the grotto, watching them attentively.  The animal transformed into a helpless old lady, with a gruff, husky voice which intimidated them:

“These waters are enchanted”, she told them.  A bewitched maiden who turned into a fairy called Agrila, lives in this grotto.  A woman who was very miserable in her previous life.  Her memories are so sad that even though she lives in the grotto now and can enjoy so many treasures, she feels alone and tends to cry a lot.  Sometimes she’s happy and sometimes she’s very sad.  When Agrila the fairy is happy, the water flows very sweet.  When Agrila is sad and crying, her tears make the spring bitter”, said the mysterious old lady as she wet her hand under the fountain.

“And why do the men change so much depending on the taste of the water”?, one of the young girls asked the old lady.

“It was a man that made her feel miserable and made her cry. It was also a man who bewitched her. Although Agrila the fairy is dying of love, she doesn’t forget that the man is the cause of her pain”, said the old lady, turning her back on all of the girls. “If her tears make the spring bitter, the men who drink the water feel just like her; sad and unhappy. 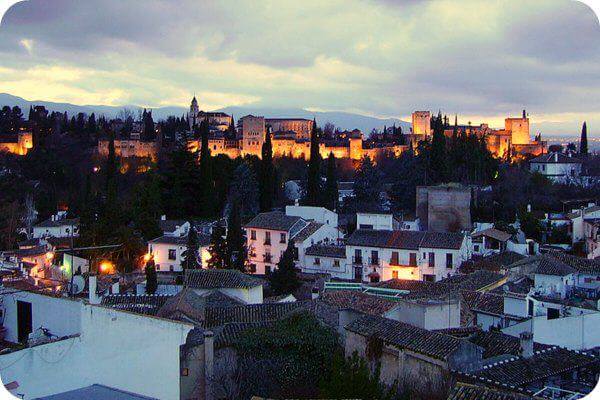 The old lady’s words created a stir amongst the youngsters, talking amongst themselves and, taking advantage of the commotion, the mysterious woman disappeared from the grotto, taking flight as an owl once again.

All of the youngsters agreed to keep quiet about what went on in the grotto, as well as the power this secret gave them.  However, the rumour spread like wildfire amongst the young people in the Albayzín, and in just a few days, they all knew the secret about Agrila the Fairy’s fountain.

Women from all over Granada went to collect water from the fountain, and their husbands began to worry about why their wives carried their pitchers so far, when there were lots of springs in the city.

Without making anyone suspicious, the women played, little by little, with Granada’s power: if the men had to go the battle, the women would give them the bitter water to make them more agitated and violent in combat.  If there was peace and calm, they gave them sweet waters to restore harmony and happiness.

Over time, some of the women began to use this secret for their own benefit.  They turned to Agrila’s fountain and collected different jugs of water; bitter, normal and sweet.  They had discovered that if they gave them too much bitter water, their husbands not only became angry or sad, but also depressed. Some of the young people gave such a large amount of bitter water to their husbands that they refused to leave home and were hopeless and solemn.  Because there were so many similar cases, Granada’s wise men and doctors began to suspect something.

One of the important wise men of Granada ordered the youngest of his soldiers to dress as a woman and go to the meeting points to try and find out what was going on.  So, the soldier followed them to the markets, gardens and fountains, but was still none the wiser. At last, he followed them to the fountain where they all went in search of water.

There, the young boy found out the terrible secret that the women of Granada were hiding! The next day, he told everything to the wise man who sent him.

“What you’re telling me is horrible, Selim! How could this happen?”, asked the wise man, nervously. We must stop them from collecting water from Agrila’s fountain, immediately! If we don’t, the women will have control over Granada. Call upon the best Ethiopian soldiers and go straight to the grotto. Make sure nobody else collects water from this fountain. Go! Now!”, the wise man ordered, opening the door and inviting him to leave, hastily.

The soldier obliged and headed off to Agrila’s fountain, with a group of soldiers following behind him. Just as they were about to reach the entrance of the grotto, an old lady approached them and said:

“Do you really think you can take on Agrila the fairy?”

“Who is Agrila?” Asked Selim, angrily, getting down from his horse.

“Agrila is the fairy who lives in this grotto, and, her power is immense! You can’t take handle her. Get out of here if you fear for your lives!”, threatened the old lady.

Fairies in the Albayzin 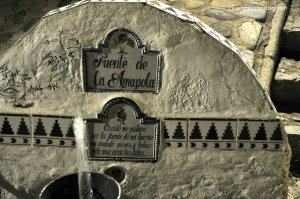 Selim ordered one of the soldiers to apprehend the old lady, but she turned into an owl and flew off towards the forest. From that day on, the soldiers patrolled the grotto, day and night.  At midnight, a sweet melody came from inside the cave, inducing them all into a deep sleep.  Agrila the fairy left her cave and cut off their hair one by one. She cut, she sang and she laughed, taking the hair of every man inside the grotto with her.

At sunrise, the soldiers woke up and saw that nobody else had any hair left on their head. They started to panic as they heard cackles coming from deep inside the grotto. Selim got so angry that he ordered them to go inside and catch Agrila, but nobody dared to move.

“Cowards!”, shouted Selim while he went into the cave alone.  “Come in with me. That is an order!”

None of the soldiers dared follow him, and after a few minutes, all fell silent. They stopped hearing the cackles and Salim’s orders.

The soldiers guarded the entrance to the cave for many days, waiting for Salim and stopping the women from collecting water from Agrila’s fountain.  However, tired of waiting, they went back to Granada, leaving the water unmanned and open to anyone who should want some.

The legend says that there were even more disappearances in Agrila the fairy’s grotto, and that of those few who had the courage to go inside, none of them were ever seen again.  So the young girls from the Albaicín began to feel scared and stopped collecting from the fountain.

After the conquest of Granada by the Catholic Monarchs, Agrila the fairy disappeared from the grotto, banished by the Christians.  After being forced to abandon what had been her home for centuries, she cried so many tears that the fountain’s waters flowed forever bittersweet.

They say that Agrila disappeared to a paradise for those looking for a bit of hope and magic.