Legend of the Rose of the Alhambra

The backdrop for the legend is The Infant’s Tower. The Alhambra in the 18th century had poorly kept gardens in addition to abandoned buildings. The tower had been left uninhabited, due to superstitions held by the inhabitants of the fortress, since it was rumoured that in the past the Princess Zorahayda had breathed her last breath in the tower.

Legends of the Rose of the Alhambra

The Legend of the Rose of the Alhambra takes us back to the time of Philip IV of Spain, when the court moved for a period of time to Granada.  One of the pages accompanying the monarchs, Ruiz de Alarcón, was the favourite of Queen Isabella. He was known for his handsomeness. He distractedly took one of the court’s falcons for a walk through the Generalife’s gardens and its various areas filled with flora and fauna, when, in an attempt to hunt, the falcon escaped and then went to perch atop the walls of The Infant’s Tower. Ruiz tried every way possible to get up on one of the high walls were his falcon was, but it was no easy job. So he decided to investigate the tower’s surroundings and find an entrance. To his surprise, he discovered that the tower was inhabited by a young lady, Jacinta. The page was surprised by the young lady’s beauty and youth and asked her for permission to go in so he could get the Queen’s falcon back, and he finally managed to convince her to let him go in to get the falcon. 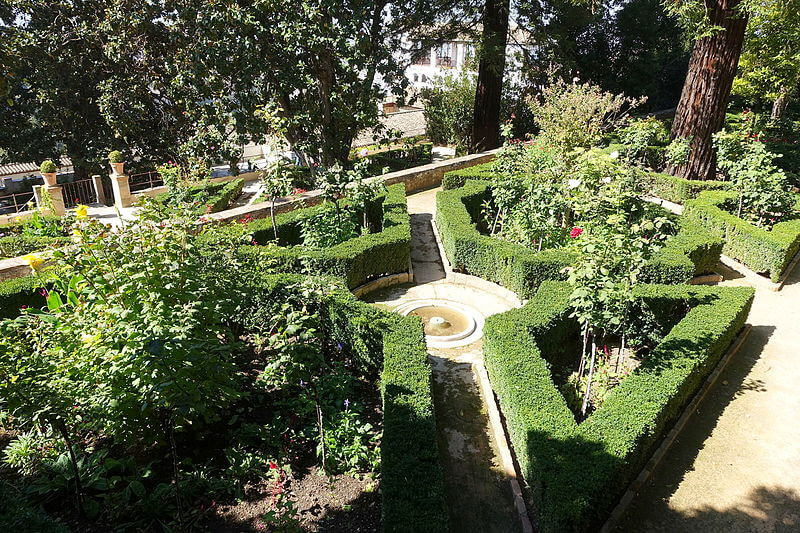 Without going any further, the roguish character didn’t hesitate in trying to court the young lady. Meanwhile, the aunt of the young lady arrived at the tower and she urged Ruiz de Alarcón to leave. He took advantage of the situation, asking the young lady for the rose she wore in her braids and gave her a kiss on her hand holding out the rose before leaving.  Something changed in Jacinta that day; she had fallen in love with the page. Yet, unfortunately for her, the monarchs left the palace shortly after.

Jacinta cried beside the tower’s enchanted fountain, from which the ghost of Princess Zorahayda appeared, to give her advice on love and lost opportunities. Thanks to a silver lute she was given, Jacinta became famous for her virtuosity and news of her skill travelled all the way to the court.

If you want to know more about if young Jacinta got reunited with the man she was in love with, don’t hesitate to read Tales of the Alhambra, by Washing Irving. You won’t be left disappointed.

We hope you have enjoyed the Legend of the Rose of the Alhambra. If you would like to find out about the place where this and other stories began, we’re waiting for you to join one of our guided tours of the Alhambra in order to accompany you into the magical world of the Red Fortress.