Alonso Cano and his graffiti in the Alhambra… 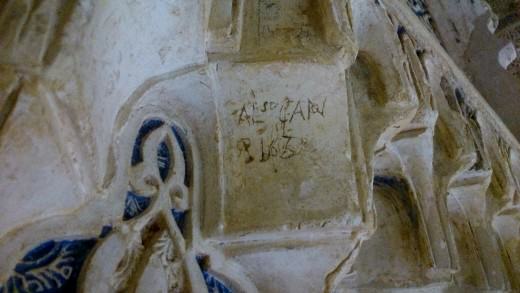 The restoration of the Mirador de Lindaraja viewpoint, by the Two Sisters Hall in the Alhambra’s Lions Coutyard, has revealed an engraving which reads “Alonso Cano Año 1630”.  It is a piece of graffiti art that Alonso Cano himself could have left inscribed on the walls of the Nasrid compound. This inscription can be found written in the same style that the cheers of the university students were then written, as can be seen on the walls of the Cathedral, close to the first Catholic University of Granada. 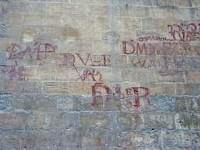 The Mirador de Linaraja has recently been restored and all of the plasterwork has been cleaned. It can now be seen in its full glory. We do not know whether or not they knew this inscription existed before the cleaning process. However, after it being completed the inscription is so clear that it cannot be missed by anyone.

The restorers, out of good judgement, left it intact and in its rightful place. We do not know whether or not the true inscription has been documented, but if it is authentic and was done by Alonso Cano, it is without a doubt a very interesting sign of the presence of this important Granadino artist in the Alhambra.  Yet another of the famous visitors who wanted to leave their mark on the Red Fortress, perpetuating his name on the Alhambra, before the creation of what is today known as the famous Signatures Book.