Autumn is well on its way and with it so are our most prized seasonal fruits. Among them we find pomegranates, quince as well as citrus fruits. Some culinary traditions have been developed using them and we’re going to reveal them now. However… they don’t just have a culinary history. Today, we are going to take a look at the pomegranate right from its origins, as well as some interesting facts about it.

Are pomegranates just part of our heritage that we use in a variety of ways in today’s cuisine? Let’s go back in time to find out.  To start with, the granada, or pomegranate, is the fruit that gives name to our fantastic city. However, there are a number of theories about the name, originating from the Zirid period when the city was known as Medina Garnata. 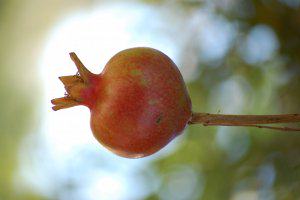 We’ll start with a bit of history – the tree itself is native to Iran, although over time it has spread and is now cultivated across the Mediterranean, where the plant started became a common sight. The process of it spreading out has given rise to a number of different pomegranate varieties such as the ones that can be found in Turkey: bigger, darker and more sour, that are mixed with other ingredients and made into juices at street stalls.

It is believed to have been the Berbers who brought the fruit to what is known today as Europe. Back then it was also believed to be a cure for fevers, and in towns such as the ones in Babylonia, people used to chew the seeds of the fruit before going into battle to make them invincible. On the other hand, in Islam, it is considered to be one of the trees of Paradise.

A few curiosities and facts about the pomegranate: known and found in both legends and literature. It appears in Greek mythology as having being planted by Aphrodite in the underworld, as well as being the tree that hid Shakespeare’s Romeo so that he could sing to Juliet. In the east, more specifically in China, pomegranates are offered to newlyweds, as the colour red symbolises good fortune. Another is the fact that the tree is also used in Japan in the well-known bonsai art form. In terms of the cuisine, we can see that the pomegranate has been used in many delicious recipes for marmalade, smoothies, teas, sorbets and as an ingredient for cooking. An example of these recipes is a salad made with pomegranate, tomato, chicory or orange amongst other ingredients.