The Great Captain in Granada: The sharpest and most faithful soldier

Every era has its own particular values. In the 15th century, honour came first. And to defend and display your honour, you had to do something very difficult: giving everything for the glory of your kingdom and the Crown. The Great Captain, Gonzalo Fernandez de Cordoba, was a master at this. He lived his whole life with Castile in his heart. But in addition to being an excellent soldier, all those who knew him emphasised another quality: his compassion and kindness. Would you believe that Boabdil, the last Muslim King of Granada, surrendered at his feet and ended up becoming his friend? This gives us a clue as to the stature of the Great Captain’s personality and why one of the main streets of Granada is named “Great Captain Street”. Would you like to get to know him?

Who was the man from Cordoba who volunteered his life to the Catholic Monarchs?

In the 15th century, people were born where they were born and on that basis, they had to do their duty. Gonzalo Fernández de Córdoba was a cousin of Ferdinand the Catholic. As such, his life could only have one purpose: to defend the royalty and increase their power, as did such legendary characters such as Ivanhoe himself. Thus, while still a child, he entered the court as the royal pageboy of Henry, the brother of Isabella the Catholic. Since then, he served the Crown with fierce loyalty, yet always known for his humility and good heart.

So much so that, after Henry’s death, when a power vacuum occurred, Isabella the Catholic entered into a bitter struggle with her other brother for the throne. The faithful Gonzalo Fernandez de Cordoba defended Isabella, with both his sword and his ability for military strategy. After this show of honour, Isabella of course promoted him and he became her shadow and trusted man on the battlefield. Once she had secured the throne, Isabella began the process of the Reconquer: the recovery of territories for Castile and the Catholic faith.

Court intrigue persisted, to the extent that it was rumoured that Gonzalo Fernandez de Cordoba and Isabel the Catholic had a too close relationship. However, the Queen was so widely adored that few believed those rumours, and the Great Captain’s prowess was enough to understand why the most brilliant Queen there had been for centuries was united with the court’s most ingenious and honourable soldier. That friendship ended up furthering the greatness of Castile. If there was one thing Isabella knew how to do, it was to choose the right people.

The Great Captain in Granada: Surrender of the last Andalusian kingdom

After five centuries of struggles to conquer territory for the Christian kingdoms, in 1492 only one remained in the hands of the Muslims: the Nasrid Kingdom of Granada. Over time, they had been losing strength and the Catholic Monarchs were aware of it, especially Isabella. Did you know that she had several miscarries because she was travelling to the hotspots of conflict? Can you imagine travelling hundreds of kilometres on horseback while pregnant, with only the limited medical resources of that time? Get to know this Private tour Places of Isabella the Catholic in Granada.

In those hotspots, the same person always waited: Gonzalo Fernández de Córdoba. This made him well aware of the conquests, the territories won, as well as any problems yet to resolve. Isabella continued to trust him blindly and did so because her successes were unquestionable: she tightened the borders between Castile and Granada from day to day. Furthermore, he was not afraid to put himself in the front line of battle, with his armour and sword as his only defence in the melee. But his strength did not prevent him from seeing that the most important thing in war was strategy, of which he was also a genius. He knew how to combine soldiers, cavalry and infantry in a magnificent way. And that strategy meant that he did not hesitate to be the first to climb the wall of the enemy, to capture Boabdil, the last Nasrid King, in Loja.

Get to know this Private Tour in Granada.

It makes sense to think that, during the journey from Granada to Castile, the relationship between the two was non-existent or brutal. Not at all. They established a beautiful friendship, because the Great Captain knew that he should to treat Boabdil with the dignity he deserved and Boabdil knew he should value this and his will to make the war as bloodless as possible. Finally, Boabdil knelt before the royalty as a sign of respect. Afterwards, the Great Captain knelt before Isabella the Catholic

The Great Captain after Isabella the Catholic 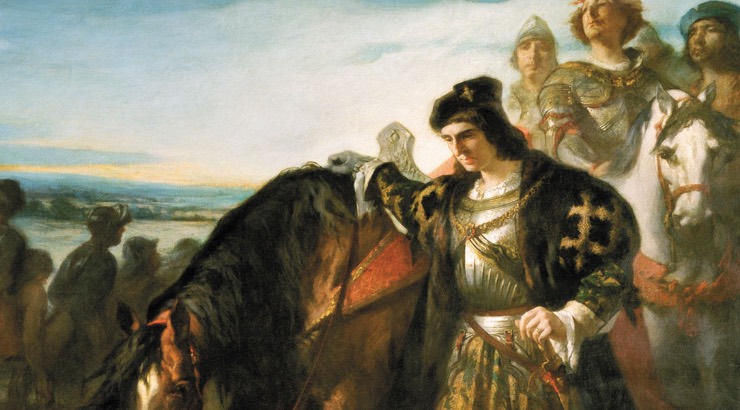 If the Iberian Peninsula was in turmoil, so too was Europe. When the continent decided to build a Christian Empire, the main powers fought against each other in order to become the centre of that empire. The struggle was full of betrayals and alliances, but of course there were also clashes on the battlefield. Thus, by seizing territories from one another, they were able to show off their strength.

Gonzalo Fernández de Córdoba undoubtedly continued being faithful to the Crown of Castile and Aragon. He fought in Italy and France for honour and glory. The opponents were powerful and joined forces. So the Great Captain once again swapped the sword for the brain to reform, discipline and modernise the armies, to live up to the mission they had entrusted to him. And he did very well. Thanks to his good deeds, Carlos I of Spain and V of Germany, the grandson of Isabella and Ferdinand, ended up becoming the emperor, the Caesar of Christianity, largely thanks to the work done by the Great Captain.

However, Ferdinand the Catholic doubted his honesty. He thought the honest knight had stolen money. The King asked him directly by letter and Gonzalo was so offended that he, along with his family, decided to retire to Loja, the town in Granada which made him famous, where he died of a rare fever.

The legend of the Great Captain begins in Granada and extends throughout Europe. His exploits resulted in many victories and many lives were saved, since under his strategies and reorganisation of the armies there was always respect for life and also for the enemy. He made war an instrument of politics. Moreover, he always lived on the basis of loyalty to his kingdom and his own conscience. Once again, one of the most interesting characters in history lived his greatest moment in Granada.