Thank you letter sent by the Seminario Mayor de Granada

In November 2017, Cicerone had the opportunity to take part in the Encuentro de Seminaristas del Sur de España (Southern Spain’s theology Seminary Meeting)) which took place here in Granada. This seminary aims to educate around one hundred priests from across the country. We should also mention that Don Javier Martinez, Archbishop of Granada took part in this event. 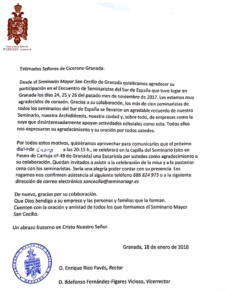 During the seminary, the priests were able to visit and explore some of the areas that are home to so much of our province’s history, such as the Monastery of Cartuja, the Abadía del Sacromonte (Sacromonte Abbey), the Albayzín, Granada Cathedral, the Cuevas de San Pedro and even the Catedral of Guadix. Cicerone, in collaboration with different groups and businesses, also offered a give away to all participants so that they could take a little memory of Granada away with them.

The future priests have had the opportunity to lead prayers alongside their mentors, but also moments for relaxation. 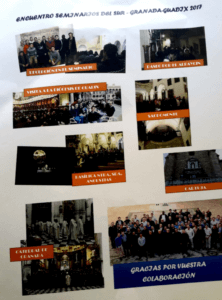 The Archbishop of Granada also dedicated a few words in order to continue the pastoral work. He encourages them so that they continue their religious lives even if they do come across a few hurdles along the way.

If you would like to read more about this topic, you can find links to Granada’s Archdiocese here: Cohabitation of the future priests in Guadix and Seminarian Meeting in Southern Spain.