On April 1st of last year, the RTVE programme La Aventura del Saber broadcast on La 2, took to the streets of Granada accompanied by CICERONE Cultura y Ocio. The theme of the program was the Andalusí Legacy. 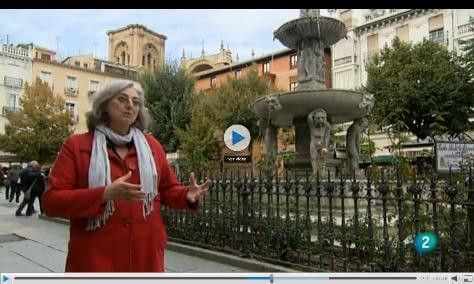 Aventura del Saber: Andalusí Legacy. The report on this legacy takes a tour around the most characteristic parts of Al-Andalus. The first stop is the Pabellón de Al-Andalus in the Museo Parque de las Ciencias. Afterwards, the routes mentioned in the Fundación del Legado Andalusí are compiled. In order for the cameras to capture the relics of Granada’s Andalusí past, Mª Angustias Valdecasas, manager at CICERONE Cultura y Ocio, showed them the Corral de Carbón, Plaza Bib-Rambla and the Madraza Granadina.

Following the tour by CICERONE, our good friend José Miguel Puerta Vilchez intervened with an excellent contribution on the Bañuelo and Barrio de Axares. “The term Al-Andalus refers to the Iberian territory that was under Islamic rule from 711 to 1492. Lasting for almost 8 centuries, it shaped an inheritance, the Andalusí, which has come to form a significant part of the hallmark of Spanish and Mediterranean cultural identity. The Fundación El Legado Andalusí works to recover, disseminate and value the legacy of Al-Andalus, and to promote the values of progress, creativity and tolerance. The Pabellón is in Granada’s Parque de las Ciencias. Al-andalus meets science? At these facilities, visitors have access to more than 4500m2 of interactive play and activities that will bring them close to the scientific and cultural legacy of Al-Andalus. The Foundation has created routes across more than 300 Andalusian towns, ending up in Granada. The report informs us of the content exhibited in the Pabellón del Legado Andalusí in the Parque de las Ciencias, and follows a route around Nasrid Granada that takes us from the Corral del Carbón, to Plaza de Bib Rambla, the Madraza and the 11th century baths in the Albayzín, before finishing up in the Alhambra.