Cemetery of San José in Granada a Summer plan

A wander around the Cemetery of San José in Granada could be the perfect idea for a summer’s day. A visit to this peaceful spot where you can take in the views of Granada from one of its viewpoints.

The Cemetery of San José in Granada is of great historical significance as it’s the second oldest cemetery in Spain, dating back to 1805. However, it has adapted to the population and its needs by way of expansions and refurbishments over the years. In the surrounding area, you can find the tombs of some figures who have been of importance to the city of Granada, including Enrique Morente, Gallego Burín, Ángel Ganivet, Emilio Herrera or José María Rodríguez Acosta.

In the interior, you can admire different examples of funerary art from the 19th, 20th and 21st centuries. An example of this is the old Neo-Romanesque chapel in the Patio de la Ermita (where there are also remains of the Nasrid Palace) or the Espacio Memoria de Granada. Some of these sculptures, vaults and other works of art are made by artists from our beloved city.

This photo illustrates the photography competitions in the Cemetery of San José in Granada. 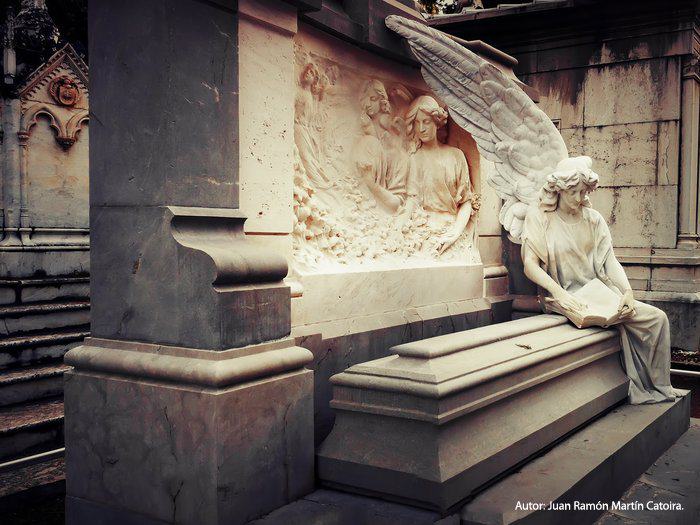 The Cemetery of San José forms part of the Alhambra historic complex, as it’s located in the Dehesa del Generalife (Generalife meadow). It’s also close to another more well-known monument known as the Silla del Moro. However, the cemetery in Granada doesn’t tend to be as well-known as other monuments, nor is it included in the itineraries of those who come to visit Granada.

We’d recommend a visit to this cemetery in the hands of experts like Vanessa, who can guide you on a journey though time, in particular the night time visits which only take place during summer.