The University of Granada has developed a virtual website that is the first in Spain that will bring all of the heritage belonging to universities in Andalusia to the general public. This site has started to exhibit the heritage of universities in Andalusia, thanks to 3D digitalisation of their pieces and historic sites. Furthermore, it offers virtual trips through some of the most representative halls in historic university buildings. 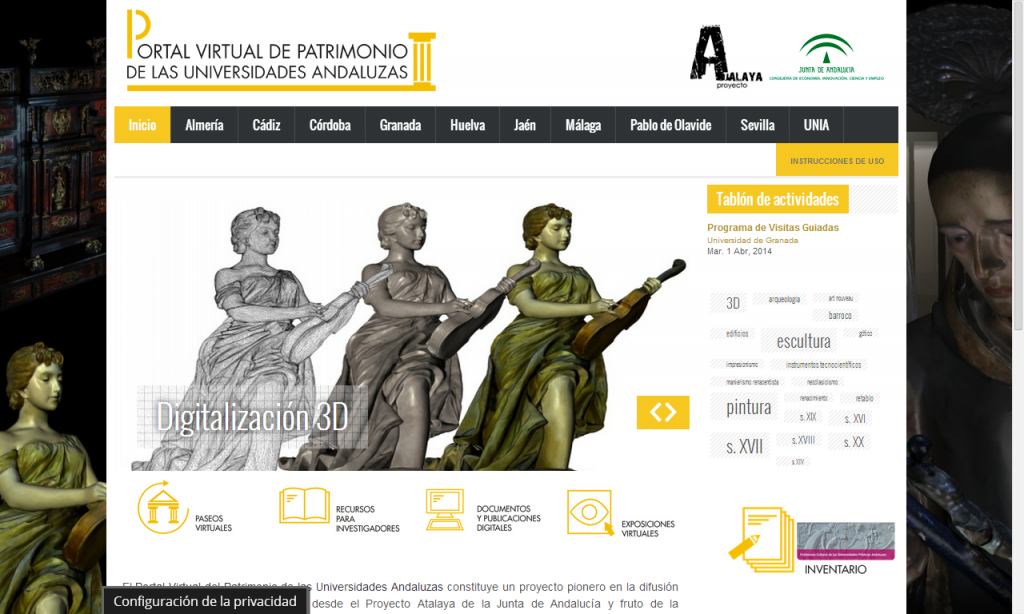 At this time, the project, funded by the Department of Economy, Innovation, Science and Employment via the Atalaya project and coordinated by the University of Granada, has 40 three dimensional pieces and 15 historic rooms or buildings from Andalusian universities, although the content will keep increasing.

According to Leonardo Sánchez Mesa, the coordinator for the site and the director of the Department of Movable Heritage at the University of Granada, the project aims to make highly valuable heritage which is not very well known more accessible.

Thus, the ten public Andalusian universities work in a network in the culture and heritage field, to encourage citizens to learn about these works and buildings in the universities and as a consequence, in order to motivate them to visit them in person.

The website employs techniques such as the digitalised 3D reproduction of the pieces and historic sites (using laser scanning technology) to produce interactive models letting users inspect the reproduced pieces.

Using this interactive website the necessary will be a support for other services, such as the production of individual tour guides for the buildings, by using digital mediums (phones and tablets). In addition, it will mean the chance to design “digital exhibitions” that combine the Andalusian university heritage in 3D virtual exhibitions.