The mysterious Jew in the Realejo

He dominates the entrance to our quarter of Realejo and is often mistaken for some centuries old Arabic poet. He suffers the harsh weather and mischief by those who climb up a pedestal to offer him a cigarette (the position of his lips lets him hold one in his mouth). He keeps his right hand on his heart and holds up a document to the heavens, as if taking an oath.

He’s Yehudá ben Saúl Tibón, Jew, Granada resident, doctor, philosopher, poet and patron of translators since he is the founder of the Tibonidas dynasty. 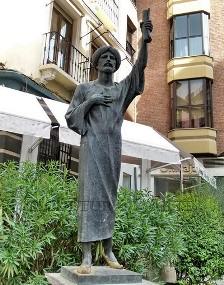 He spent the end of his life in the Italian Provence. In fact, he left Granada (Things to do in Granada) in 1148 at only 28 years old, yet the mark he left was forever. His solid, upright statue has dominated two streets, Calle Colcha and Calle Pavaneras, since 1988, when Antonio Jara held the mayor’s office. Tibon’s translations from Arabic to Hebrew made it possible to pass on a great amount of very valuable knowledge.

His lineage of intellectuals made it to the 20th century via philologist and historian Guiterre Tibón, who died in Mexico in 1999. He was the one who donated the statue of his ancestor which we now see daily. According to what was published by journalist Daniel Rodríguez Moya in La Opinión de Granada, this man, originally from Milan, was one of the foremost academics in Mexico and its culture in addition to being the inventor of a portable typewriter patented by Olivetti which resulted in considerable profits. Today his legacy is kept alive by his likeness which welcomes people to the old Jewish quarter of Realejo, and by all of the translators that remind the patron of his trade. Among them there is the “Los Tibónidas” group, an association of associations campaigning to raise awareness about the profession and which are responsible for translators being present at Granada’s Feria del Libro (Book Fair).