Granada in a day: discover the essential city

When you do Granada in a day, you also tour the history of Europe in a day. This is why we’re inviting you to take a trip to Granada’s old town and on this tour, you’ll find the mark that recent centuries have left on our city, while exploring our country’s history. Will you join us walking around Granada for a day?

Granada in a day: past and present

Our proposal is a route that goes from the lowest to the highest part of Granada. That way, finishing up the day in the Albaicín, you’ll be able to put the finishing touch on the day with one of the most beautiful sunsets in the world and a great tea in one of Granada’s famous tearooms, sound good?

Cathedral and the Royal Chapel

The Cathedral of Granada was the first renaissance cathedral in Spain. It was built beside a mosque. When the Catholic Monarchs conquered Granada, they wanted to bring the Catholic faith to Granada residents. This is why, even before the conquest, Isabella the Catholic already had permission from the Pope to build churches in Granada. The queen, being the ambitious and enterprising woman she was, chose the modern Renaissance aesthetic when building Granada’s Catholic centre.

Connected to the Cathedral, you’ll find Royal Chapel, where the remains of the Catholic Monarchs lie. If you want to get to know it on the inside, we recommend a private tour to the interior of the Cathedral and Royal Chapel of Granada: you’ll be able to get all your questions answered and chat with your guide, without getting lost in a crowd.

In addition to being able to enjoy the amazing cathedral, you’ll also find a spice stand that’s been there for decades. In fact, it’s become a monument in and off itself.

From a building which was crucial for Christianisation, we move to a prayer centre, essential for science and culture during the Nasrid dynasty. We assure you that you’ll be impressed by the ceramic tiling, the stucco with plant-based and geometric motifs which we’ll also see in the Alhambra… This building wasn’t just a place of prayer for Muslims, but was also a Koranic school, where astronomy, poetry and music were also studied. Therefore, you could say we’re also talking about Granada’s first university. The only part of it that remains is the oratory, but the mark it leaves on you is impressive.

If you want to do Granada in a day, the Alcaicería is another essential stop. Walk through these little streets which at one time were the business heart of the Nasrid period. In fact, it should  come as no surprise that clothing and craftware are still the main feature in the Alcaicería. During the Nasrid period, the raw silk trade was the star attraction. Business was so important that at night they closed the doors to the neighbourhood, can you imagine how much the silk must have been worth? During Christianisation, it continued being the centre for business until nearly the 19th century.

Now we’ve moved on to the 19th and 20th centuries, a passionate time when Granada intellectuals shared a common goal: to Europeanise Granada. Gran vía de Colón and Plaza Isabel la Católica were the result of this effort, since the idea of building a long and wide avenue crossing a major part of the city and facilitating business life was a European inspiration. The economic boom that the Vega de Granada underwent made the most important businessmen in the city finance the construction of Gran Vía, around the square paying homage to Isabella the Catholic.

And now, where are we going? To what century? Well, now it’s time for the 16th, right when Granada was the cultural and political centre that businessmen and intellectuals in the 19th and 20th centuries dreamed of. That’s why, next to Plaza Nueva, you’ll see the Real Chancilleria, the Superior Court of Justice, with its jurisdiction even extending to the Canary Islands, as well as the magical Carrera del Darro and Paseo de los Tristes. These days Plaza Nueva is a centre for poets, painters and musicians that create a major part of Granada’s cultural life.

The Bañuelo: the hammam and or public bathhouse 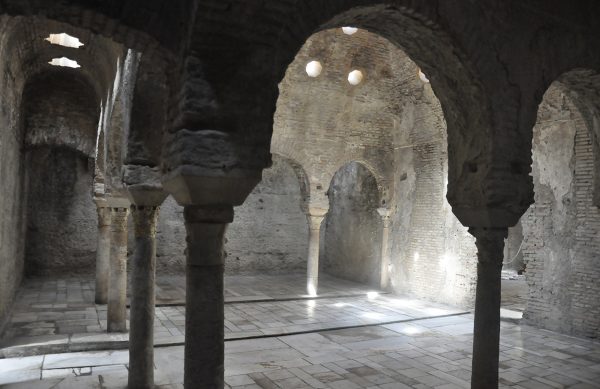 Water and public bathhouses were essential for Andalusian life and for Granada. You’ll find fountains during your entire 1 day tour around Granada, with water coming directly from Sierra Nevada. Cool, to provide relief for those walking around. On the other hand, cleaning and spiritual peace are an indispensable part of Arabic culture.  This is why in Granada we’ve got one of the oldest hammams: The Bañuelo, a practically natural spa in Granada’s old town, where there are both cold and hot water rooms. 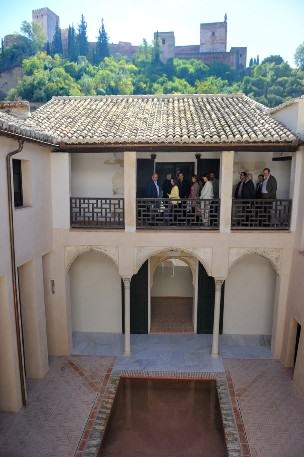 Here you’ll find typical Moorish house. It’s interesting how it was impossible to figure out what social class the houses’ residents belonged to, since all of the houses were nearly the same. Therefore, once you see this building, you’ll be able to get an idea from up close of how people lived in the Al-Andalus period.

Cármenes in the Albaicín

Cármenes are stately homes featuring the following: spectacular gardens, a courtyard with a fountain and a wall protecting the owners from intruders. The most famous of these is Cármen de los Mártires (Cármen of the Martyrs), bearing that name because the Christians who fought for the Catholic Monarchs were apprehended there. 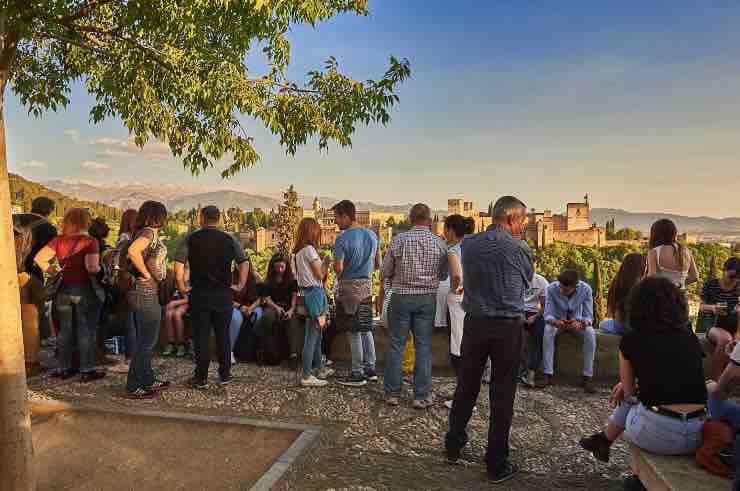 Both of these viewpoints look out on the Alhambra, but Mirador de San Nicolás is the most popular. Built beside a mosque, you’ll see stands by the Association of Artisans of Granada and you’ll hear flamenco musicians filling the air and the sunset with music that is truly authentic and filled with artistic charisma. However, at Mirador de San Miguel you’ll find less people, but the view is nearly as spectacular, which one are you going to choose? But, why choose?

It is the Gypsy quarter par excellence, also looking out on the Alhambra, the cradle of flamenco, because it comes from a mix of Gypsy, Jewish, Visigoth and Arabic culture. You’ll be able to finish off the night here in a zambra, which are age-old caves that were homes for the gypsies and which these days offer flamenco shows.

With this tour you’ll get to know about the history of Granada in a single day. Of course, to refuel, the best choice is to resort to some typical tapas. If you go for tapas in different areas, you’ll discover the mix of cultures and eras, past and present, that invigorate the streets of Granada.