These Lorca-themed pedagogical tours for students turn his legacy into an educational resource to learn about the values of Andalusian and Spanish literature.

The different pedagogical tours have been programmed so that they can be integrated in the school curriculum of secondary or high school education, between the ages of 12 to 18.

The walks run through the urban fabric of central Granada, the surroundings of the Alhambra and the villages of Vega de Granada (the Granada plain), Valderrubio, Fuente Vaqueros as well as Viznar and Alfacar and the natural areas of the Sierra de Huétor.

You can choose from eight different itineraries:

Fuente Vaqueros: The beginning of a genius 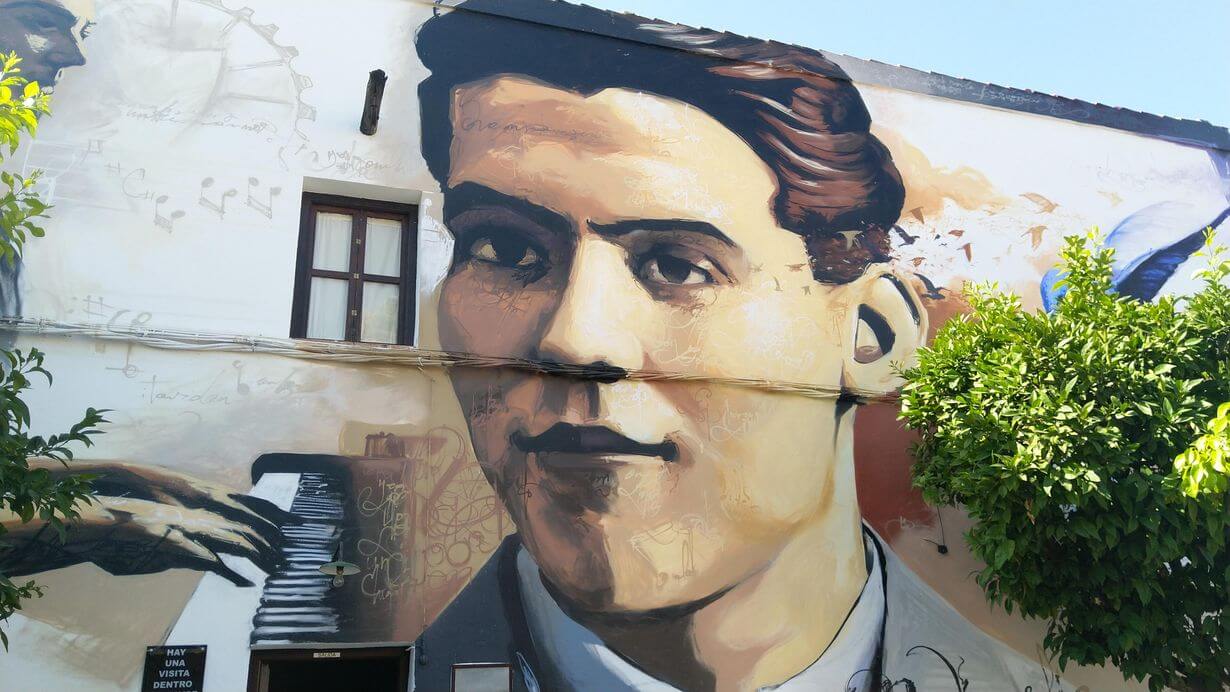 On this tour we take the students to the village of Fuente Vaqueros, where the poet Federico García Lorca was born. There we will visit the home/museum to view two exhibitions, a permanent one about the theatre company that Lorca directed in 1932: La Barraca, and another temporary exhibition in the house’s old barn and which changes every year.

During the tour we will pass by the Lorquianos Study Centre, the Church where Federico was baptised, we will discuss the Arabic origin of the village and the Nasrid vestiges that still remain. We will also come across the graffiti of the “Child of the paintings”, and discuss modern art that, just as a century ago, is still an instrument of social denunciation and the cry of a people demanding a look at the most ordinary and unnoticed aspects of society. 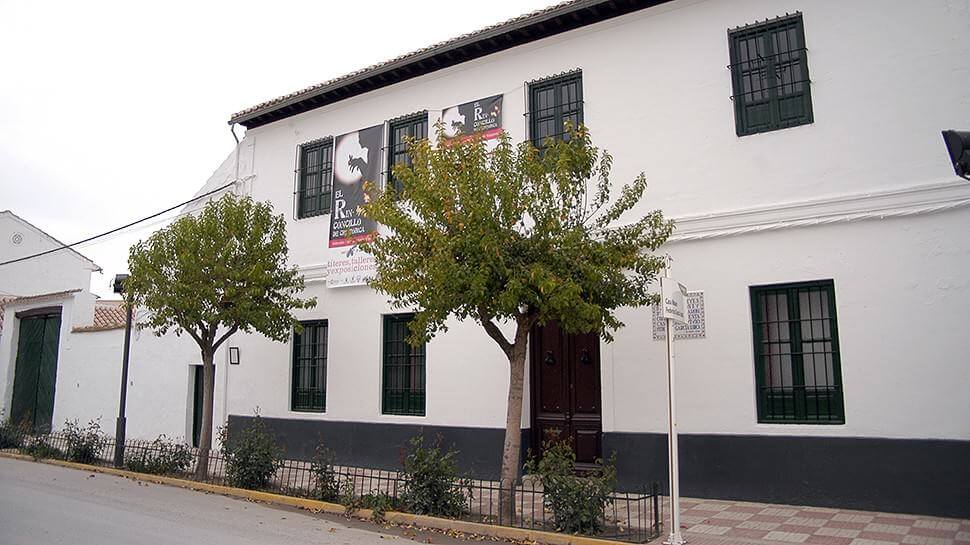 We devised this route with the aim of bringing students closer to the youth of the poet Federico García Lorca.

We will travel to the heartland of Granada’s Plain in the village of Valderrubio where we will visit the García Lorca’s family home, stroll through the corners of deep Spain imbued with the drama and folklore with which Federico described them and get to know the house that inspired one of his most popular works: Bernarda Alba’s house. We will also discover the natural nooks where young Federico used to write on summer afternoons.

An essential visit for students to understand the magnitude of the life and great work of the world’s most famous poet and playwright. 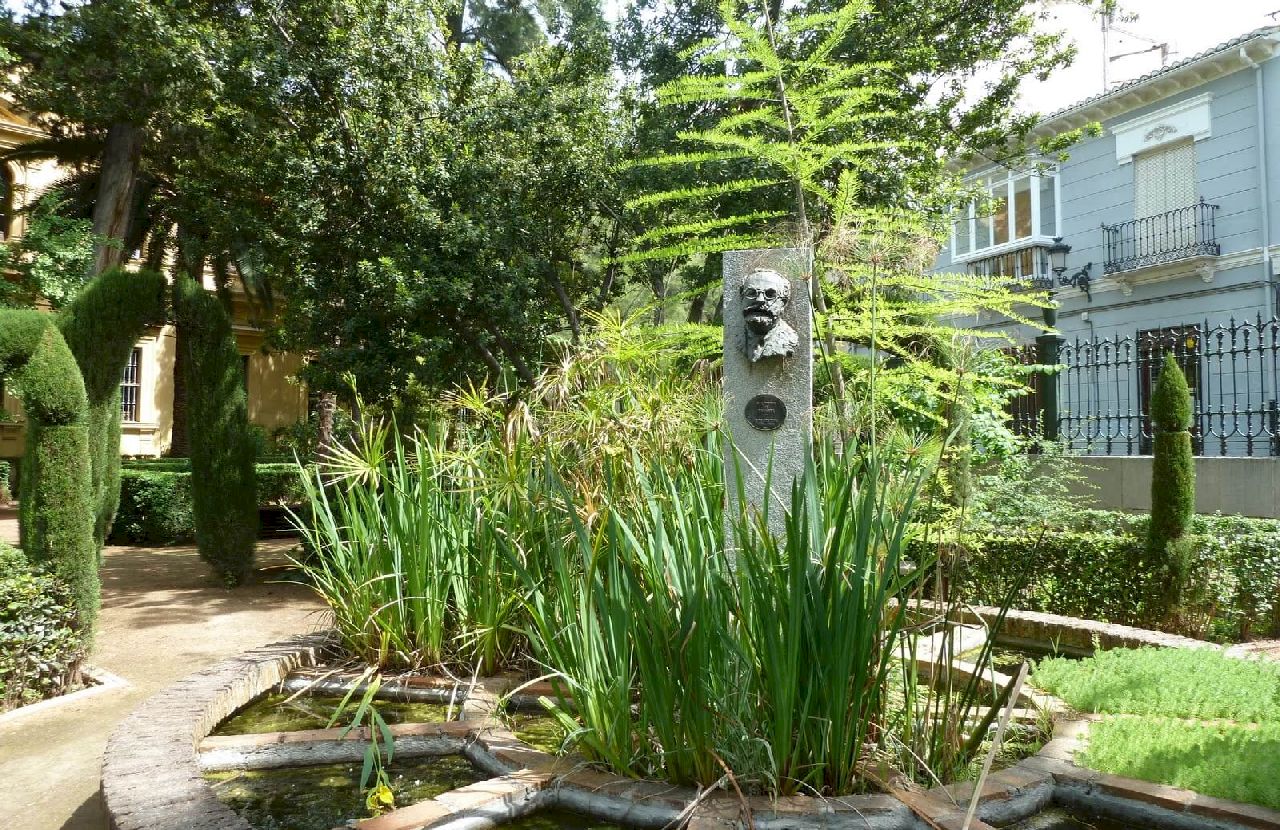 Federico García Lorca’s route in Granada is ideal to bring students closer to the life and work of the poet and playwright whose plays have been performed all over the world.

The route is designed to awaken students’ interest in reading his work and finding empathy for him. By strolling through the places of the city that marked his life, they will color in the background to the poet’s life, and the enthusiasm that our professionals transmit will leave students with a strong impression and valuable knowledge about his literary work. 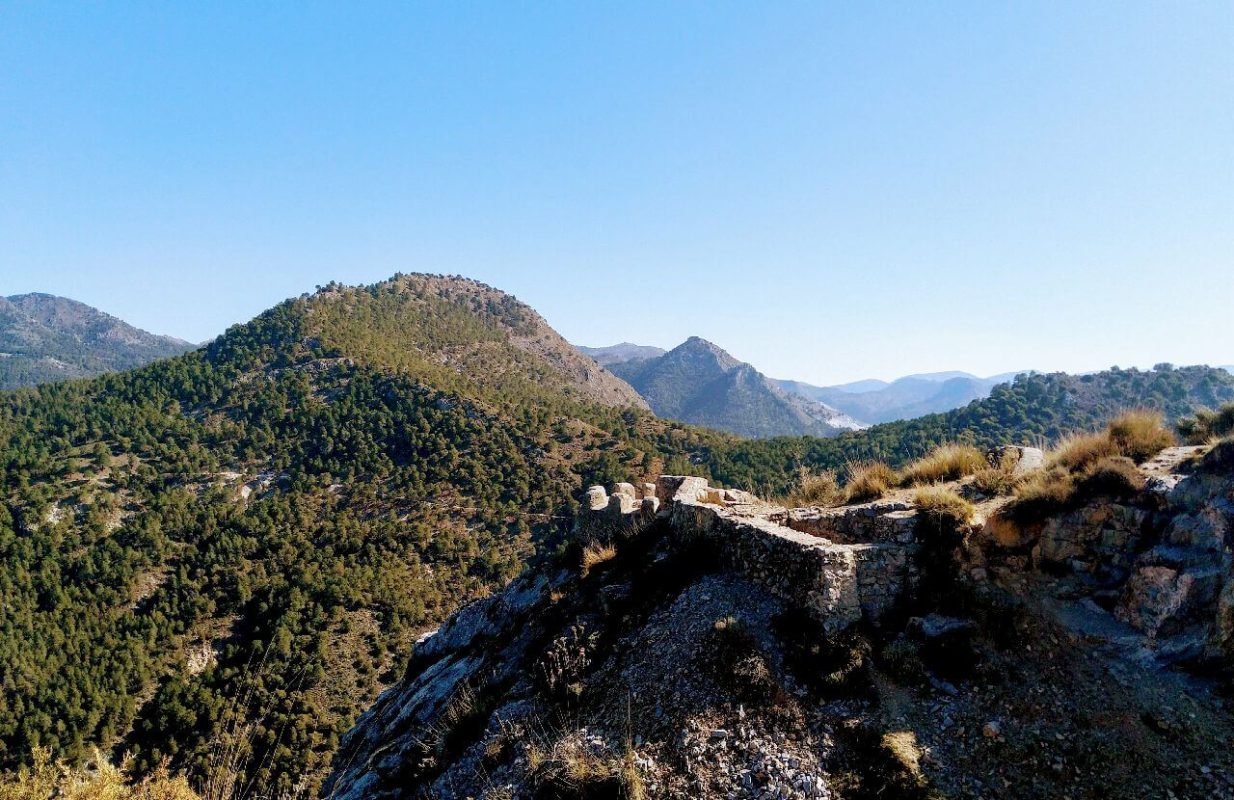 Undoubtedly one of the most overwhelming and historically charged routes. During the tour, we will travel to the villages of Viznar and Alfacar, visiting the places that Lorca went through on the last day of his life.

We will accompany the students through one of the most impressive natural areas of the trails that run through the Sierra de Huétor to the trenches of the Cerro del Maullo. We will discuss the civil war, historical memory and how the last hours of the poet and playwright Federico García Lorca’s life were spent.

This tour is tasked with raising the student’s awareness and contributing and reinforcing the knowledge of the traces of war in Granada’s history through the steps of one of the greats of 20th century literature.

The Poet’s route to the Huerta de San Vicente 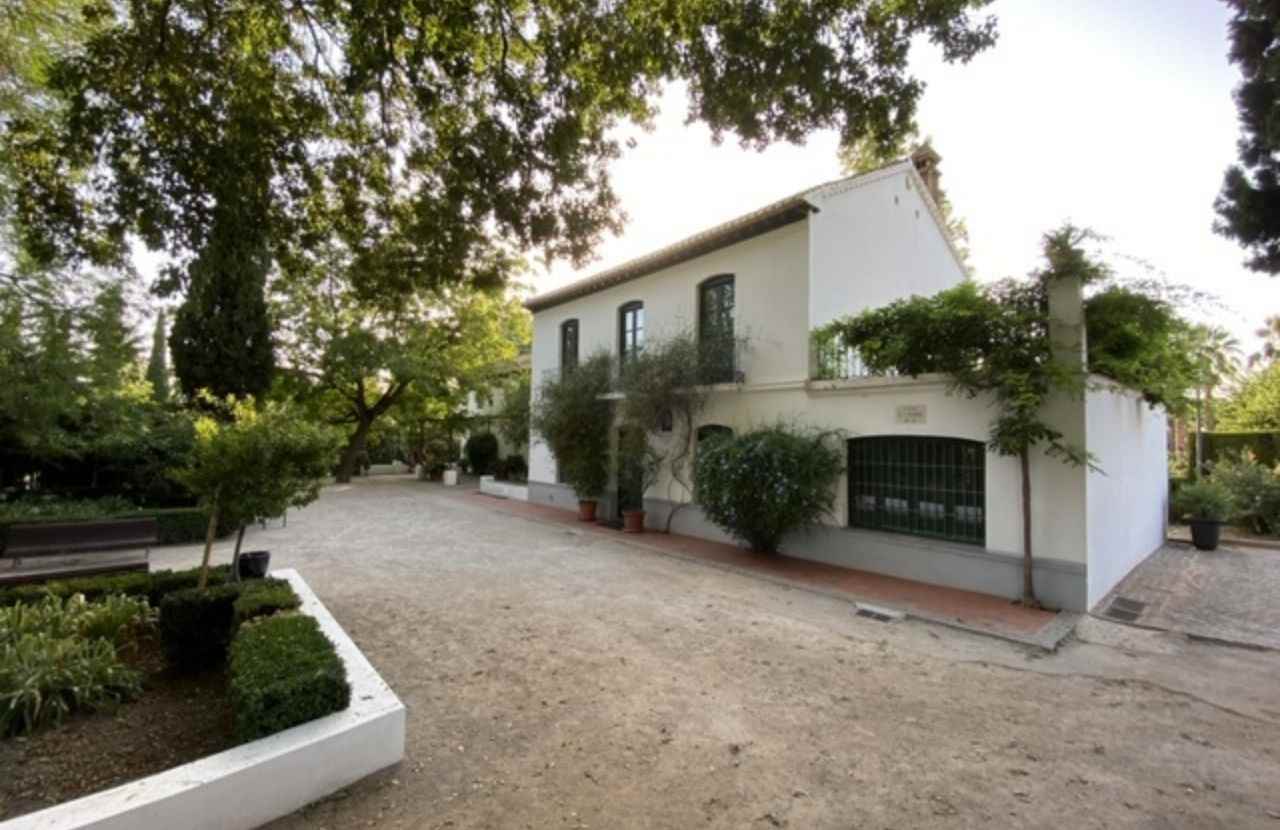 Through this activity, our aim is to guide students through a tour that begins in the heart of Granada and ends at the summer home of the García Lorca family: La Huerta de San Vicente, a rural property now converted into a museum, and is also the centre of the García Lorca Park, undoubtedly the city’s most emblematic park.

We will walk through the most symbolic places of Lorca’s life, simulating the route that the poet took when he went to the city and what was possibly his last journey in Granada before being arrested and shot in the fateful summer of 1936.

Our guides will talk about the architectural changes that the city has undergone as a result of its modernization in the early 19th century, the gentrification process and also about one of the most interesting Lorca references: Mariana Pineda and the Placeta de Gracia, an important meeting venue for the people of Granada in the 20th century, among other places whose relevance we would not have imagined when we see its streets today.

The “Duende” of Flamenco at the Alhambra 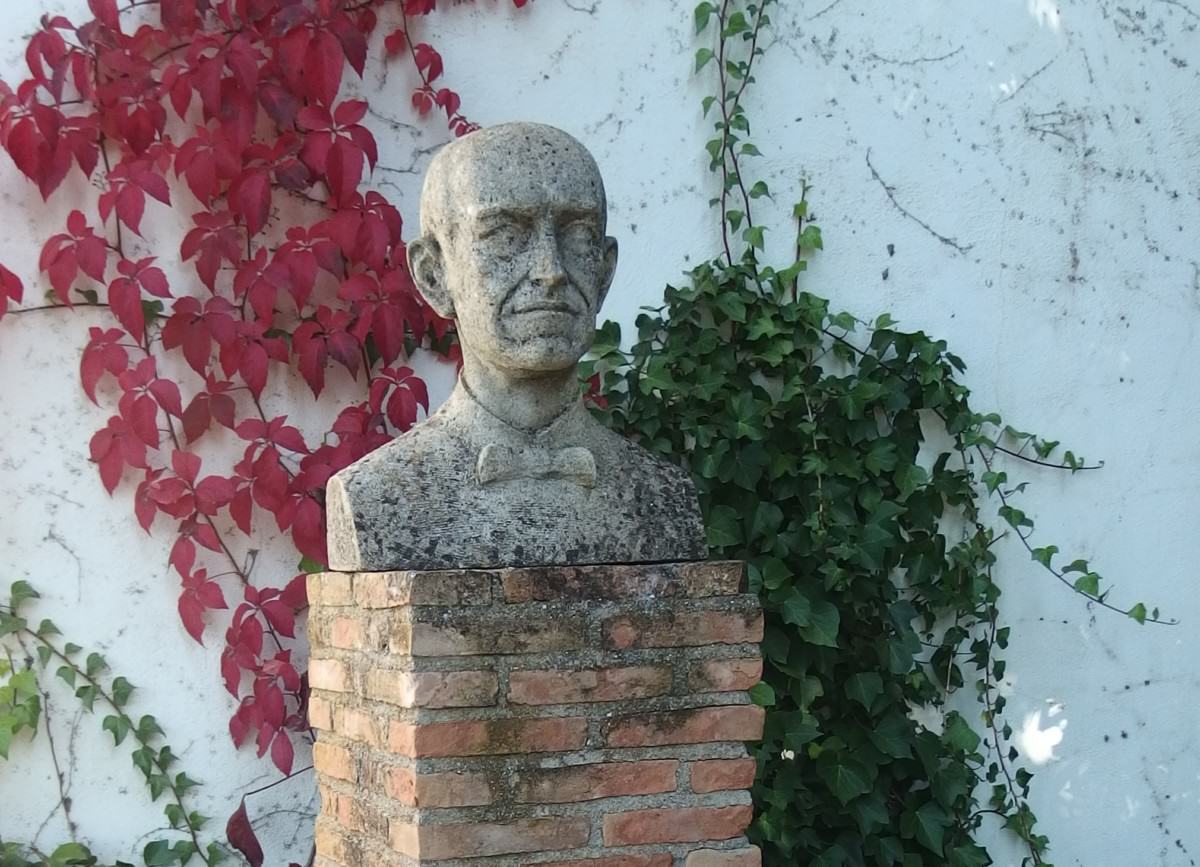 On this tour, we will walk hand in hand with two geniuses from the worlds of literature and music, Lorca and Falla, to show students how the admiration they both felt for Andalusian folklore took form in the history of the Alhambra, raising flamenco to the quality of an art form worthy of being safeguarded because it expressed the soul of the Andalusian people. It is a goal they sought and achieved to the benefit of Andalusian culture.

During our visit, we will walk through the Alhambra Forest, a place where we can take a look back at the life of other illustrious Granadans like Ángel Ganivet. Among other places, we will visit the site of the Carmen de la Antequeruela, home to musician and composer Manuel de Falla, the theater at the Alhambra Palace and the Legacy Museum of musician Ángel Barrios, all places essential to understanding the importance of traditional music in our city.

With the goal of raising awareness among students about the preservation of popular culture and the symbiosis these figures found between friendship, creative talent and a love for art, our guides will explain to our young visitors how the First “Cante Jondo” Festival came about to showcase the living history of flamenco, now on the World Intangible Heritage list. 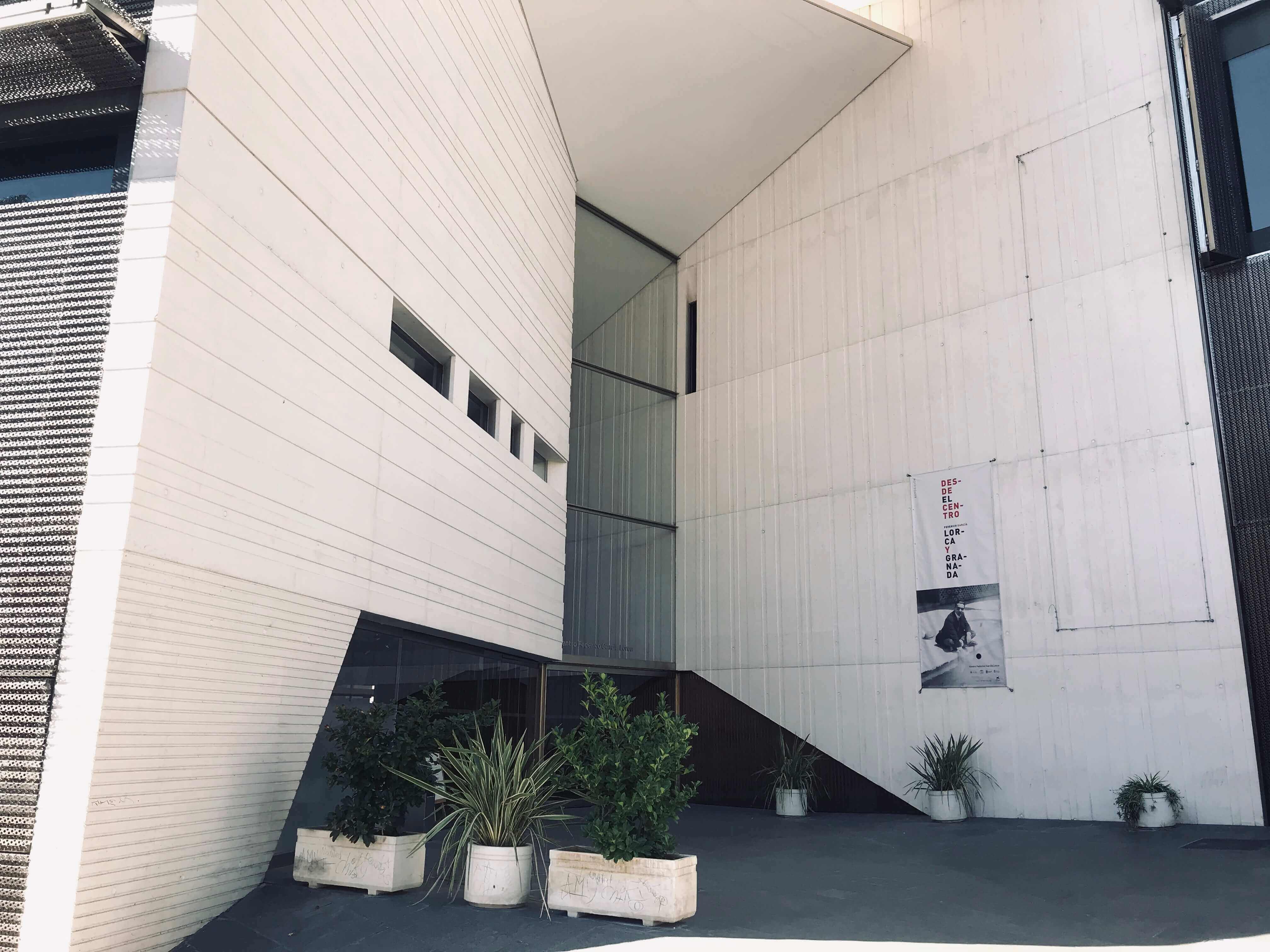 The visits to the Federico García Lorca Center are an excellent educational resource where the student will be able to observe the different temporary exhibitions that are on show in the Center’s facilities. These usually last about 7 or 8 months and their content is changed according to the theme of the exhibition.

The Center is home to the valuable legacy of the poet, comprising numerous documents, letters, manuscripts and photographs that are sometimes used in the exhibitions themselves, where the common thread is always Federico García Lorca, combining with some particular theme, from his relationship with a city or place in the world, the analysis of one of his works, a stage in his life or a conceptual interpretation of his work through the vision of other artists.

The Federico García Lorca Center is highly committed to the dissemination of culture and the development of contemporary arts, where it offers national and international projects in the field of plastic, scenic and audiovisual arts, among other disciplines. 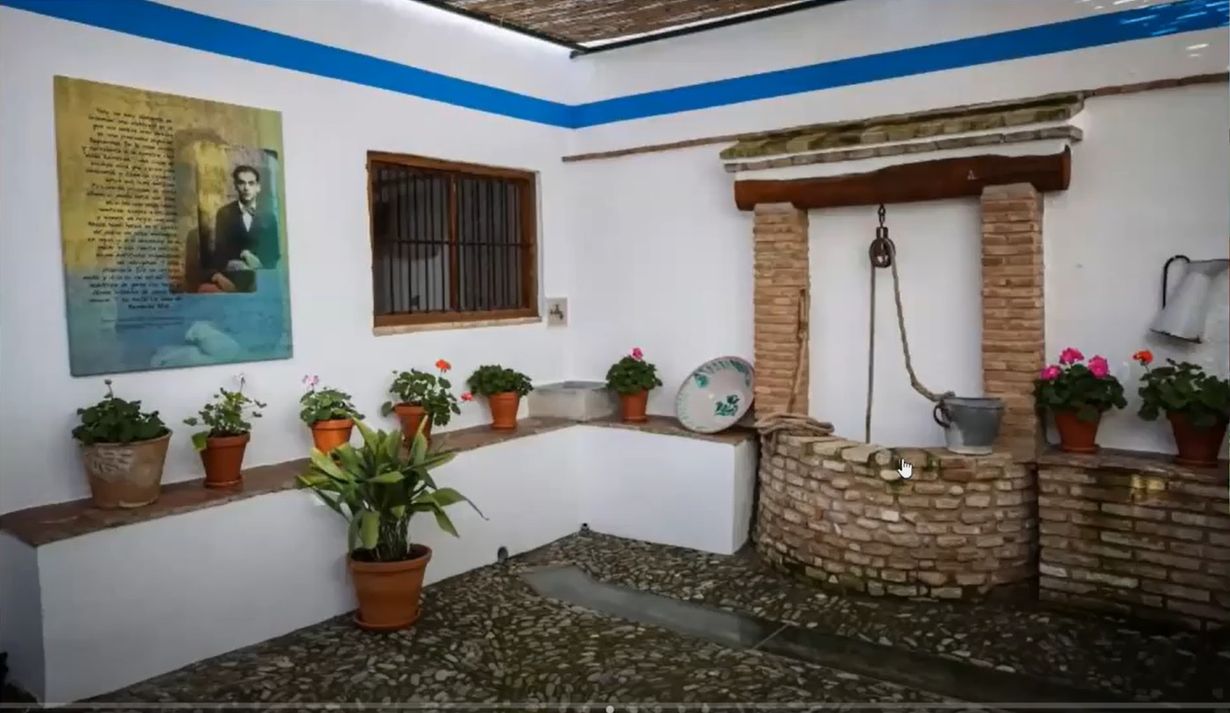 We offer this virtual masterclass on the life and work of the multifaceted writer Federico García Lorca to give students the opportunity to learn about his life, his references, the places he travelled to and the experiences that marked his biographical and literary career.

From the house where he was born and the villages of La Vega where he spent his childhood, the Student Residence in Madrid where he rubbed shoulders with Dalí and other references of the avant-garde, his trip to New York in an initial contact with modernity… were part of the pieces of the path that led him to become the most recognized universal poet in the world.

Another of our goals is to encourage students to acquire and/or reinforce the habit of reading and to approach his most important works, the plot and analysis of these, which will be of great help in the understanding of Lorca’s literature.